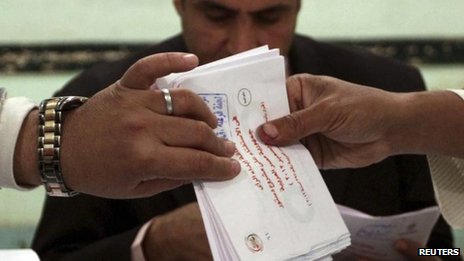 Egypt's main opposition has demanded an inquiry into the referendum on the draft constitution, citing fraud.

The National Salvation Front urged the election commission to investigate the "irregularities".
Initial unofficial results indicate a "Yes" vote for a document which President Mohammed Morsi says will safeguard democracy.
The opposition says the constitution favours Islamists, and the referendum has highlighted bitter divisions.
The result is expected to be officially announced on Monday.
If the constitution passes, elections must take place within three months. In the meantime, legislative powers would remain with Mr Morsi.
'Only one battle'
State media reports of the results following Saturday's second and final round of the referendum suggest that some 63% of voters had backed the charter. Turnout was estimated at 30%.
But the National Salvation Front said on Sunday the vote had been marred by "fraud and violations".
These included polling stations opening late and Islamists seeking to influence voters, the opposition said.
Spokesman Amr Hamzawy told a news conference in Cairo: "We are asking the commission to investigate the irregularities before announcing official results."
Another spokesman, Khaled Daoud, told the BBC the Front would not contest the result, which it believed would be a "Yes", but he said there was "serious fraud".
The Front has complained that there was not enough legal supervision of the referendum - many judges had announced a boycott.
The opposition said before the referendum that its campaign would continue in the wake of a "Yes" vote.
Front member Abdel Ghaffer Shokr told Agence France-Presse on Sunday: "The referendum is not the end of the road. It is only one battle. We will continue the fight for the Egyptian people."
But the Freedom and Justice Party, the political wing of Mr Morsi's Muslim Brotherhood, said it hoped the "Yes" vote would begin to heal divisions and bring stability.
Opponents have said the draft constitution fails to protect the freedoms and human rights that they sought in the uprising that ended Hosni Mubarak's rule last year.
They accuse the president of pushing through a text that favours Islamists and does not sufficiently protect the rights of women or Christians, who make up about 10% of the population.
President Morsi's mainly Islamist supporters say the constitution will secure democracy and encourage stability.
The latest unrest began after Mr Morsi issued a decree on 22 November stripping the judiciary of the power to challenge his decisions.
After an outcry, the president revoked much of the decree, but he refused to back down on the draft constitution.
The text was rushed through by a constituent assembly dominated by Islamists.
Egypt has seen large demonstrations by both sides, which have occasionally turned violent, ever since.
Tweet
Pope Shenouda Article