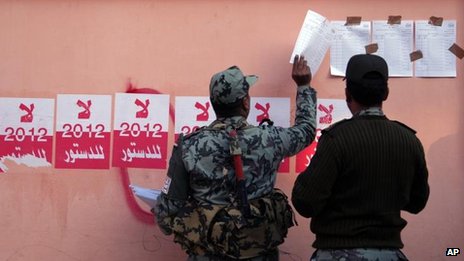 Egypt's vice-president has announced his resignation, on the day the country completed its voting in a controversial referendum on a draft constitution.

Mahmoud Mekki, a former judge who was appointed vice-president in August, said the "nature of politics" did not suit his professional background.
Polls have now closed in the second leg of the referendum, which is widely expected to approve the draft.
However, opponents say this will not end the country's unrest.
They say the constitution favours Islamists and betrays the revolution that overthrew Hosni Mubarak last year.
President Mohammed Morsi and his supporters say the document will secure democracy.
Late on Saturday, state television announced that the central bank governor, Farouq al-Uqdah, had also resigned from his post. However, a cabinet official later denied the report.
November decree
Mr Mekki announced his resignation just hours before the end of voting in the second round of the referendum.
He said, in a statement read on television: "I realised a while ago that the nature of politics does not suit my professional background as a judge."
The timing of Mahmoud Mekki's resignation is both critical and telling. Observers here say that choosing to announce his official resignation only hours before the results of the referendum meant he did not want to be associated with the voting process or its consequences.
There's also speculation that this resignation implies the draft constitution has already passed. Because, according to the new charter, the president is not obligated to hire a vice-president, in which case Mr Mekki was pre-empting the vote.
Mahmoud Mekki is one of the most high profile judges in Egypt. In his resignation statement he said he did not know about the decree that gave President Morsi sweeping powers in November - giving the impression that he was unhappy with not being consulted on key decisions.
Mr Mekki, 58, said he had tried to resign on 7 November but that circumstances had forced him to remain.
The Israeli conflict in Gaza and President Morsi's controversial decree on 22 November granting himself sweeping new powers delayed his decision.
Mr Mekki's resignation statement indicated he had no prior knowledge of the decree, which stripped the judiciary of powers to question the president's decisions.
The BBC's Shaimaa Khalil in Cairo says Mr Mekki appeared to be giving the impression that he was unhappy with not being consulted on key decisions.
If, as expected, the draft constitution is passed, there may have been no role for Mr Mekki, our correspondent says, as the document does not require the president to appoint a vice-president.
Seven of Mr Morsi's leading advisers have resigned over the past month, many indicating they had not been consulted over the president's moves.
After an outcry, the president revoked much of the 22 November decree, but he refused to back down on the draft constitution.
The text was rushed through by a constituent assembly dominated by Islamists and boycotted by liberal and left-wing members, and facing a threat of dissolution by the country's top court.
Egypt has seen mass demonstrations on both sides ever since.
However, voting in the second stage of the referendum appears to have gone relatively smoothly.
Some 250,000 security personnel were deployed nationwide to keep order.
Polling stations had been scheduled to close at 19:00 (17:00 GMT) but remained open until 23:00. Voting was also extended in the first leg.
Ballots were cast in the 17 provinces that did not vote in the first round on 15 December.
Unofficial results are expected to come in over the next few hours.
Turnout was reported to be just above 30% in the first round, with unofficial counts suggesting some 56% of those who cast ballots voted in favour of the draft.
Official results are not expected until Monday, after appeals are heard. If the constitution passes, parliamentary elections must take place within three months.
Analysts suggest the document will be passed.
Egyptians casting votes in favour of the charter said they were voting for stability.
In the town of Fayoum, "yes" voter Hanaa Zaki told the Associated Press news agency: "I have a son who hasn't got paid for the past six months. We have been in this crisis for so long and we are fed up."
Opponents of the draft say it fails to protect the freedoms and human rights they sought in the uprising that toppled Mr Mubarak. Some have also complained about the role given to Islamic clerics and what they say is a lack of a clear commitment to equality between men and women.
"I'm voting 'no' because Egypt can't be ruled by one faction," Karim Nahas, a 35-year-old stock market broker voting early on Saturday in Giza, told Reuters news agency.
Opposition activists say there will be more unrest whatever the outcome.
One voter in Ikhsas village, Marianna Abdel-Messieh, agreed. "Whether this constitution passes or not, there will be trouble," she told AP. "God have mercy on us."
Tweet
Pope Shenouda Article