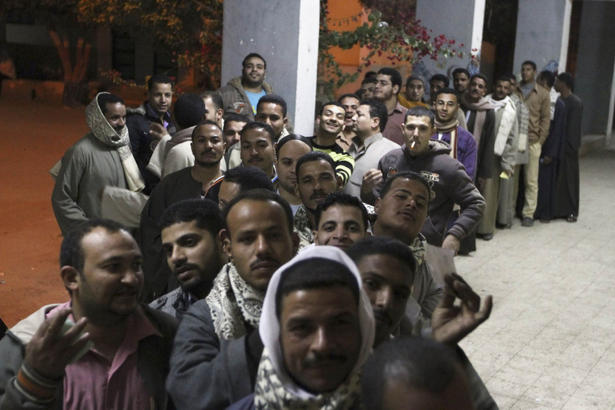 Egypt’s disputed constitution has received a “yes” majority of more than 70 per cent in the second and final round of voting on the referendum, according to preliminary results released early Sunday by the Muslim Brotherhood.

The results, posted on the Brotherhood’s website, show that 71.4 per cent of those who voted Saturday said “yes” after 95.5 per cent of the ballots were counted. Only about eight million of the 25-million Egyptians eligible to vote — a turnout of about 30 per cent — cast their ballots.
The referendum on the Islamist-backed charter was held over two days, on Dec. 15 and 22. In the first round, about 56 per cent said “yes” to the charter. The turnout then was about 32 per cent.
The Brotherhood, from which Islamist President Mohammed Morsi hails, has accurately predicted election results in the past by tallying results provided by its representatives at polling centres. Official results would not be announced for several days. When they are, Morsi is expected to call for the election of parliament’s law-making, lower chamber no more than two months later.
The low turnout in both rounds is likely to feed a perception of illegitimacy for the constitution, which Islamists say will lay the foundation for a democratic state and the protection of human rights. The opposition charges that it places restrictions on liberties and gives clerics a say over legislation.
The referendum on the constitution has opened divisions in Egypt that are not likely to disappear any time in the near future. Hurriedly adopted by Morsi’s Islamist allies, the charter has left Egypt divided into two camps: The president, his Brotherhood and ultraconservative Islamists known as Salafis in one, and liberals, moderate Muslims and Christians in the other.
The two sides brought hundreds of thousands of supporters to the streets over the past month in rival rallies. Clashes between the two sides left at least 10 people dead and hundreds wounded.
Tweet
Pope Shenouda Article