An unconventional love story blooms in 'Chaos, Disorder' of Cairo 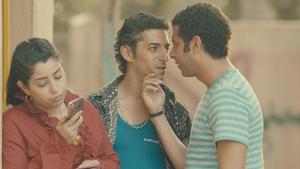 Somewhere in the throbbing mass of metropolitan Cairo, there is a spiral stairway. It’s a single piece of cast metal, extracted from some room, where it presumably once connected an upper floor with a lower floor.

Now it sits in the dust in the midst of a garbage dump. Surrounded by mounds of plastic bottles, the spiral stairway goes nowhere.

These stairs are one of the memorable images of “Chaos, Disorder” (Harag w’Marag), the feature film debut of Egyptian writer-director Nadine Khan. Khan’s work was one of the more intriguing experiments to emerge from the Dubai International Film Festival, where it had its world premiere last week. The film screened in the Muhr Arab Feature competition, where it won a Special Jury Prize.

Khan’s film is social satire-cum-love story and its unidentified Cairo neighbourhood is a principal character.

The main source of economic livelihood here appears to be the nearby garbage dump but there are services on offer. The neighborhood beauty, Manal (Ayten Amer), is daughter of the fellow whose shop offers facilities for long-distance telephone calls. There’s a gym, where Zaki (Mohamed Farrag), the neighborhood sports star, works out. There’s plenty of hash available too, something Mounir (Ramsi Lehner), the rakish neighborhood thug who spends his days lounging with his pals in the neighborhood’s central square, indulges in regularly.

The most notable thing about this unnamed place, though, is that the most basic services – drinking water and ghaz, meat and vegetables – must be trucked in from outside. The shipments are infrequent enough to make them major community events as residents queue up, then scramble, for access.

Contributing to the neighborhood’s carnival atmosphere – both on disbursement days and not – is the local radio station, whose DJ’s narrate mundane goings-on the way an omniscient narrator might do in a comic novel.

Khan says her initial inspiration for “Chaos, Disorder” came while working as an assistant director on the set of Yousry Nasrallah’s “Bab al-Shams,” and specifically in Sidon’s Ain al-Hilweh refugee camp.

“It was very interesting for me, this community that’s enclosed within walls,” she recalls. “It started when I discovered that Coca Cola enters through a dealer. That was the most interesting thing for me and of course I began to connect it to slums and other areas in the Arab world.”

Stories of compact communities are often read as representing microcosms of the larger community that contains it – Cairo, say, or Egypt. Yet there is something extremely local in the story of “Chaos, Disorder,” even in the dialect of the characters, which someone casually acquainted with Arabic may have trouble understanding. Khan is a little diffident.

“The whole film was built on the concept of ‘the irregular norm,’” she explained, “something you know really well, but which is knocked off-centre, so it’s not the same.

“I hate symbolism, although a lot of people, especially Egyptians, read [the film] in a very symbolic way. Symbolism isn’t something I write into the work.

Khan says she originally wanted to shoot in Syria, so the characters would speak Shami. Then she thought she and scriptwriter Muhammad Nasr should invent a dialect for them. Ultimately they went with an existing dialect modeled on that of a specific Cairo neighborhood

“The people in my community have been there for a long time. The rules are there. The culture is there. This is how they live. They’re satisfied. I think that situation exists mainly in refugee camps and slum areas in Egypt. I was influenced by Manshiet Nasser, one of Cairo’s oldest slums, especially the garbage set-up and I cast actors from there. I think that would be most representative of my community, that and Ain al-Hilweh.”

There is a very “Egyptian” resonance in the cinematographic language of “Chaos, Disorder” – whether in the obtrusively upbeat piano music (composed by Hassan Khan, the director’s brother, well known internationally as a visual artist and writer) or the elaborate plotting and characterizations.

Indeed, Khan’s film seems to be in dialogue with the Egyptian cinema that’s come before – the disheveled plot revolves around a love triangle involving Manal, Zaki and Mounir.

“One of the things I want from this film is that it be screened in theaters in Cairo, like any Egyptian commercial film. I want it to reach people ... I really want it to be treated not as an art house film.

“For example, there’s a scene where Manal’s little cousin sees [two characters] Balgham and Dina making out in the staircase. Yet when she sees Manal she tells her Zaki is with Shahinda, a completely different story. That’s the way it is in that community.

“It’s not about what you see. There’s something there that’s different. I can’t explain it. I only see how they deal with it.”

The conflict is resolved by a football match with Zaki and Mounir on opposing squads.

“A football match for meat,” she laughs. “I think this generation is highly affected by football and PlayStation and Internet. It shows in our revolution. Even if you’re living in the most slummy area, it does affect you. It creates something very interesting.”

Khan says the upbeat piano soundtrack isn’t meant to sidestep clichéd representations of poverty. Rather it’s a gesture of acceptance towards this marginal class’s culture.

“Most artists and writers and politicians and people of a certain class are against this culture. [They voice] all this nostalgia bullshit about how ‘A long time ago we were living better.’

“That’s crap. This is a new culture and you’d better acknowledge it because it’s going to eat you soon. What I’m doing with this film is admitting it. Sure the people in this culture have their own sufferings but I believe there is also a certain satisfaction ... People don’t always want to live their lives differently.

“Hassan and I agreed ... the music isn’t about sad or happy it’s about acceptance,” she adds.

“That’s just it. We always treat them as though they were the other. In fact we are the other.”