Christians Under Attack From Anti-Government Protesters in Syria 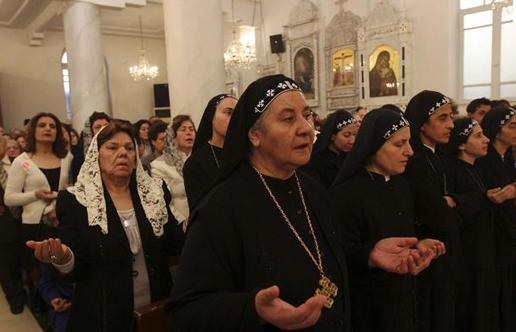 Christian communities across Syria have been attacked by anti-government protesters in recent weeks.International Christian Concern says that protesters are being led by hard-line Islamists and that Christians have come under pressure to either join in protests demanding the resignation of President Bashir Assad, or else leave the country.

Eye witnesses report seeing around 20 masked men on motorcycles open fire on a home in a Christian village outside Dara'a, in southern Syria.
Another source told ICC that churches had received threatening letters over Easter, telling them either to join the protests or leave.
In Karak, Muslim Salafists forced villagers to join the protests and remove pictures of the president from their home. One man who refused was reportedly found hanged on his front porch the next morning.
One Syrian Christian leader told ICC: "People want to go out and peacefully ask for certain changes, but Muslim Salafi groups are sneaking in with their goal, which is not to make changes for the betterment of Syria, but to take over the country with their agenda.
"We want to improve life and rights in Syria under this president, but we do not want terrorism. Christians will be the first to pay the price of terrorism."
ICC fears that the intimidation tactics may drive Christians out of Syria in a similar way to the exodus of believers from other parts of the Middle East, most notably Iraq.
Syrian Christians fear that if the hardliners succeed in taking over the government, they will try to drive Christians out of the country.
One Syrian Christian leader told ICC: "If Muslim Salafis gain political influence, they will make sure that there will be no trace of Christianity in Syria."
Another source told ICC that protesters in Duma, a suburb of Damascus, were last week heard shouting: "Alawites to the grave and Christians to Beirut!"
ICC's regional manager for the Middle East, Aidan Clay, urged the U.S. administration to take a cautious approach in its diplomatic relations with Syria.
"Unlike in Egypt, where Christians predominantly supported the revolution that removed President Hosni Mubarak from power, Syrian Christians have not participated in protests, anticipating that chaos and bloodshed will follow if radical Islam takes hold of the country," he said.
"Throughout the Middle East, Christians have been fleeing their homeland in unprecedented numbers. Now, in a country where Christians have historically taken refuge from nearby purges in places like Turkey a century ago and Iraq in recent years, Islamists are threatening their existence.
"We urge the U.S. Government to act wisely and carefully when developing policies that have deep political ramifications for Syria's minorities by not indirectly supporting a foothold to be used by radical Islamists to carry out their anti-Christian agenda."
The Syrian constitution provides for freedom of religion but the government imposes restrictions on this right. Sunnis constitute 74 percent of the population while various Christian groups constitute 10 percent, although there are estimates that the Christian population, mostly due to migration, may have dropped to 8 percent, according to the U.S. State Department's International Religious Freedom report.
Tweet
Pope Shenouda Article