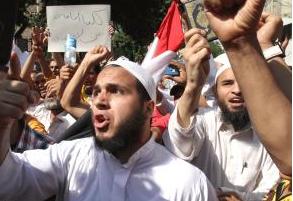 CAIRO (Update3) - Hundreds of Islamists rallied in Cairo on Friday in anger over the killing of Al-Qaeda chief Osama bin Laden by US forces in Pakistan.

Soldiers stopped the protesters from advancing a block away from the embassy after they marched from a mosque controlled by the hardline Salafi sect. They shouted at diplomats inside the embassy saying, "leave, leave" and "lower the (American) flag." Two protesters unfurled a large banner with the jihadist leader's picture above a caption saying "Bin Laden is a symbol of jihad" while a protest leader gave a speech denouncing the United States as a "tyrant." "If Osama bin Laden is a terrorist, let the world witness we are all terrorists," he said to cheers from the crowd, which included about 10 women completely covered in black niqabs. "The United States is a tyrant. Who supported (ousted president Hosni) Mubarak?" he said, before the protesters started to chant: "Obama, all those you see are Osama," referring to themselves. The man who gave a speech, dressed in a white turban, identified himself to AFP as Abu Muawiya and a member of Al-Qaeda. "Bin Laden's death will not affect Al-Qaeda any more than the death of the Prophet (Mohamed) put an end to Islam," he said. "Al-Qaeda is an extension of the Prophet (Mohamed's) pure teachings." Not all the protesters said they supported the loosely organised group, whose affiliates were blamed for a January suicide bombing that killed more than 20 people outside a church in the coastal city of Alexandria. "I'm not a supporter of Al-Qaeda. I came here out of principle, because of the way he was buried. He shouldn't have been dumped in the sea," said Ashraf Mahmud, a 46-year-old English language teacher. The mosque from which the protest began has been overtaken by Salafis who banned a cleric belonging to the government's religious endowments ministry from preaching. Its congregation has staged protests outside St Mark's Cathedral down the street, where the Coptic Church is headquartered, to demand the release of two priests' wives the Islamists say converted to Islam. That claim was echoed by an Al-Qaeda-linked group in Iraq that massacred dozens of Christians in October and threatened to kill more if the two women were not released by the Coptic Church, which denies the women are converts. Salafis believes Muslims should return to the practices of their first forbears. They are mostly peaceful, but the sect's puritanical ideology has also inspired militants such as the Saudi-born bin Laden. The sect has grown more assertive since Mubarak's ouster on February 11 and its leaders say they are forming political parties to contest a parliamentary election in September. Al-Qaeda confirmed the death of bin Laden and vowed revenge, in a statement posted Friday on jihadist Internet forums, US monitoring group SITE Intelligence reported.