by the New York Times 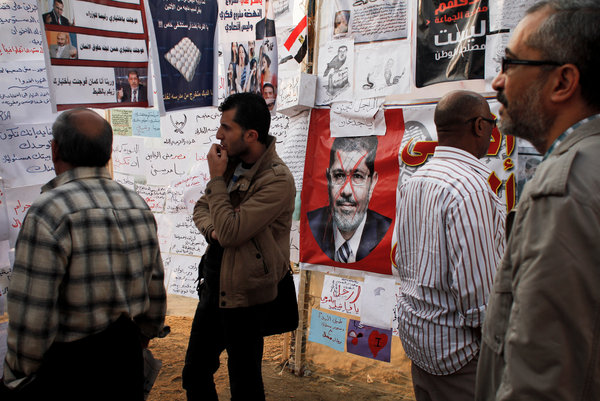 After showing a measure of unity against President Mohamed Morsi’s decision to put his edicts above the law, Egypt’s judges splintered on Monday, with one leading judicial official saying many judges would cooperate with plans to hold a public vote on a draft constitution supported by the president

The official, Judge Ahmed Abdel Rahman, a member of the country’s top judicial administrative authority, told state news media that judges and prosecutors would supervise the constitutional referendum to be held on Dec. 15 — a setback for opposition groups who had hoped to delegitimize a charter that they complain was drafted by an unrepresentative body and pushed through a constitutional assembly in haste by Mr. Morsi. Other judges have said they will boycott the referendum. Judge Abdel Rahman said judges would not be permitted to excuse themselves unless they provided a letter explaining their reasoning.

The decision left opponents of Mr. Morsi and the Muslim Brotherhood, the Islamist movement that supports him, facing the most critical test of their unity since the crisis began on Nov. 22. Opposition leaders have capitalized on Mr. Morsi’s aggressive moves by smoothing over their perennial squabbles. Some conceded that they would have to now move beyond the relatively easy work of organizing rallies and criticizing the president to the more complicated tasks of agreeing on policies and formulating collective plans.

In the coming days, they are expected to call on Egyptian voters to either boycott the referendum or to vote down the charter, with campaigns that will test the opposition’s capabilities and reach.

Both tactics carry risks for leaders who have been criticized for quickly resorting to obstructionism and for failing to concentrate on building the kind of broad constituencies that would allow them to mount a significant challenge to the Brotherhood’s popularity.

Looking beyond the current crisis, analysts said, an ad-hoc coalition would have to mature into a movement with an identity that was based on more than just being a secular alternative to the Islamists.

“That is not going to get them anywhere,” said Rabab el-Mahdi, a political science professor at the American University in Cairo. “They need an alternative platform that is not based on the division between religious and civil — a clear alternative in their socioeconomic policies that affect people’s daily lives.”

Opposition leaders insisted they were thinking ahead. “There are two processes going on,” said Emad Gad, a leader of the Social Democratic Party. “One is a temporary coalition in front of the Islamists," he said, the other, was "a permanent coalition.”

For now, the opposition has been content to use what they call gradual escalations to test Mr. Morsi. After two large rallies in Tahrir Square last week, activist plan a march on the presidential palace on Tuesday.

So far, Mr. Morsi has barely blinked, as the crisis had devolved into a deep social schism marked by episodes of deadly street violence, fisticuffs in union halls and an increasingly poisonous public debate.

With stunning ease, some of Mr. Morsi’s opponents have lumped him in with history’s most brutal tyrants, while the president’s supporters have been equally comfortable tarring their opponents as foreign agents, and revolutionaries as remnants of the old government.

“It has never been this way before,” said Amr Moussa, a former presidential candidate and opposition leader. “There is no dialogue whatsoever.”

In that atmosphere, the opposition’s escalations and the Islamists’ response has become more combustible, raising the specter of political violence. “I’m afraid of a confrontation,” Mr. Gad said. “I do not want to use the term civil war.”

There was little sign the air would clear soon. Amr Hamzawy, the founder of the Free Egypt Party and a former member of Parliament, called Mr. Morsi’s offers of dialogue “a farce” and said the opposition was fighting “a calculated attempt by the Brotherhood to take over Egypt.”

Mr. Hamzawy compared recent Brotherhood rallies to pro-Hitler demonstrations in Germany in the 1930s. “There are great similarities,” he said.

“We will not legitimize what’s going on,” he said, raising the possibility of boycotting parliamentary elections that are to be held after the constitution is approved.

“I do not see us breaking apart soon,” Mr. Hamzawy said of the opposition coalition, the National Salvation Front, that was formed during the crisis. “We have a historic chance to bring people behind us, and to stand where we belong.”

Such talk seemed optimistic, given the fissures within the movement that are discussed openly by activists and opposition politicians. Some young revolutionaries are angry that Mr. Moussa, a former foreign minister under the deposed president, Hosni Mubarak, has ended up in their camp. Others say it is only a matter of time before the rivalries between the coalition’s most prominent leaders — and their weaknesses — begin to surface again.

The opposition has been further damaged by the failure to attract a prominent political figure, Abdel Moneim Aboul Fotouh, a former Brotherhood leader who broke from the Islamist group. In a recent interview in the online journal Jadaliyya, Mr. Aboul Fotouh criticized Mr. Morsi for “governing unilaterally,” but also faulted some of the president’s opponents, who he said were “settling scores” with the Brotherhood and “stalling the political process in pursuit of their own goals.”

Professor Mahdi, who was once a political adviser to Mr. Aboul Fotouh, said it was still early to judge the emerging coalition and whether they could move past their old patterns of discord. “We’ve seen them organize and call for demonstrations,” she said. “So far, there’s nothing new.”