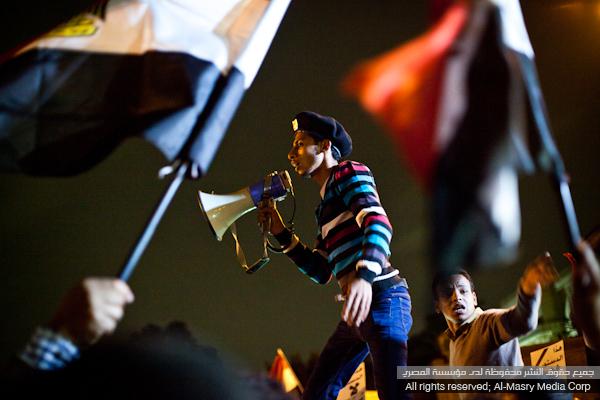 Nobel Laureate Mohamed ElBaradei, in his new position as general coordinator of the National Salvation Front, threatened nationwide protests until President Mohamed Morsy responds to calls for national dialogue over the draft constitution and retracts his recent constitutional declaration.

The leader of the Popular Current Hamden Sabbahi announced Tuesday night that the front decided to appoint ElBaradei as its general coordinator.
ElBaradei’s warning came at a press conference Tuesday night attended by the leaders of the National Salvation Front, including Sabbahi and former presidential candidate Amr Moussa.
The National Salvation Front is a coalition of political powers opposing Morsy’s 22 November constitutional declaration, which gave him the ability to override judicial decisions. The front brings together ElBaradei of the Constitution Party, Sabbahi of the Popular Current Party, Moussa of the Conference Party, Al-Sayed al-Badawy of the Wafd Party, and other political figures.
ElBaradei held Morsy and the Muslim Brotherhood responsible for the violent clashes at the presidential palace in Heliopolis between pro- and anti-Morsy protesters.
“Egyptians will protests in every place, and use all legitimate measures, and won't back down from this battle we began for freedom,” ElBaradei said.
He described the administration of Morsy as “a repressive regime.”
“The demands of the revolution were for social justice, freedom and dignity. Our battle continues, and will be peaceful. Our strength is in our unity and numbers, and we will be victorious because we are in the right,” he said.
“I call on Morsy to appear on TV to address the nation to announce that he is open to national dialogue,” ElBaradei said.
Amr Moussa said that “Egypt is now in a critical phase, the nation is divided and conflict has started that can only be blamed on the person ruling Egypt.”
“We are now one hand, one voice, tonight and tomorrow and every day, we in a democratic republic. We are open for dialogue and it has to start with retraction of the constitutional declaration... the people must read the constitution and give their opinion,” Moussa added.
One attendee at the conference heckled Moussa, shouting, “You're bringing back the Feloul [remnants of the collapsed regime] to talk about martyrs.” Moussa had once served under former President Hosni Mubarak as foreign minister.
“Innocent blood of Egyptians is running in front of the eyes of the elected president. Who is now driving the nation towards division?” Sabbahi said. “Morsy has lost all legitimacy to rule this country... he is now accused of bearing responsibility for this bloodshed.”
The National Salvation Front met Wednesday evening to discuss the proposals of Vice President Mahmoud Mekky that he raised in a press conference earlier the same day.
The state-owned Nile News channel said that the meeting, which is currently being held, is addressing the clashes at the presidential palace. The channel speculated the meeting would end with a decision about the current situation.
Mekky had earlier said the declaration would not be cancelled, and appealed to all political forces to participate in the referendum and hold a dialogue on the controversial articles of the new constitution.
The front said in a statement last night that it is giving the president until Friday to meet the demands, otherwise the civil forces would declare him illegitimate.
The statement said the mass demonstrations nationwide are proof that the president would not be able to divide Egyptian society.
“The National Salvation Front rejects the constitutional declaration and the illegitimate call for a referendum,” Sabbahi stressed.
“We will continue our struggle with our people, until the tyrannical declaration is annulled, and we will not allow a referendum to take place. Egyptians are with us,” Sabbahi concluded.
Tweet
Pope Shenouda Article