Egypt opposition forces unite in Tahrir and at presidential palace 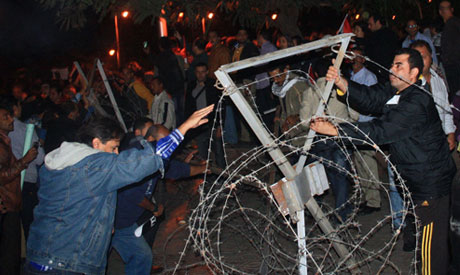 Prior to the constitutional referendum slated for 15 December, thousands of protesters gathered in Cairo's Tahrir Square Tuesday to express their unhappiness with Egypt's draft constitution and President Mohamed Morsi's controversial 22 November constitutional declaration.

Morsi's constitutional declaration made the president's decisions impervious to judicial challenge and protects the Islamist-dominated Shura Council (the upper house of Egypt's parliament) and Constituent Assembly (which wrote the new constitution) from dissolution by court order.

"Everything in the current constitution has been carefully constructed to serve Morsi and the Muslim Brotherhood's agenda," said Nahid Rouchdy, a political activist who also works in tourism. She went on to point out that, under the terms of the draft constitution, Egypt's democratically elected Shura Council would be able to pass any law that it wanted.

Rouchdy noted Morsi's authority to appoint and dismiss anyone in government, as had been the case in the Mubarak era. The activist, in her fifties, also pointed to a clause that was removed from the draft constitution that bars the creation of political parties that have religious associations.

"Many of the clauses in the articles aren't clear and are thus open to interpretation. I urge all Egyptians to read it thoroughly," said Rouchdy, whose young daughter has been participating in the ongoing Tahrir Square sit-in for the past 12 days.

Cheers, cries and prayers could be heard on Tuesday as thousands of people converged on the capital's iconic square. Many voiced their intention to stay in Tahrir to ensure that it was not infiltrated by the Muslim Brotherhood and to avoid clashes with police.

Individuals from all walks of life took part in Tuesday's demonstration, which coincided with a strike by Egyptian journalists, who marched from their syndicate headquarters to Tahrir Square. Many tourism sector workers also staged protests in the square.

"We're here today protesting against the draft constitution, which does not mention tourism," said Rasha Bashir, a human resources manager at one of Egypt's leading tourism companies. According to Riham Hussein, the manager of a diving centre in Sharm Al-Sheikh, similar demonstrations are currently being held in Sharm.

"We would rather die like human beings with our rights intact than as slaves to another corrupt system! I came back from France last week to be part of this," shouted Ghada Salem, a member of Egypt's Green Party.

Ahram Online met others like Salem who had flown back to Egypt from abroad to take part in this week's demonstrations.

Tahrir's central stage gave a platform to many Morsi critics, who voiced their demands and instigated chants denouncing the president and the Muslim Brotherhood.

"I voted for you Morsi and you betrayed us! Forget our freedoms with the Brotherhood," said one man via megaphone.

"Morsi got money from Saudi but did nothing to develop the country. I don't go to school as it has become too expensive," said 12-year-old Mohamed Ahmed Sabit.

"I have three girls and I can't look after them," exclaimed Ahmed Metwalli, a foule and taamaya vendor. "Food has become too expensive."

While protests in Tahrir Square continued throughout the day, a thousands-strong march to the presidential palace – called for by Egypt's National Salvation Front after Morsi announced the date for the upcoming referendum – began at 5pm. The front was recently established by prominent reform campaigner Mohamed ElBaradei and former presidential candidates Hamdeen Sabbahi and Amr Moussa.

As the nationwide protests reached a crescendo on Tuesday it remained unclear how the political impasse would be resolved, with the constitutional referendum less than two weeks away.

Some political analysts say the only way to resolve the deadlock is to call off the referendum and establish a committee of independent figures and international experts to revise contentious draft articles, while simultaneously establishing a "more representative" Constituent Assembly to address the amended constitution. Analysts, however, remain doubtful that such amendments will be made.