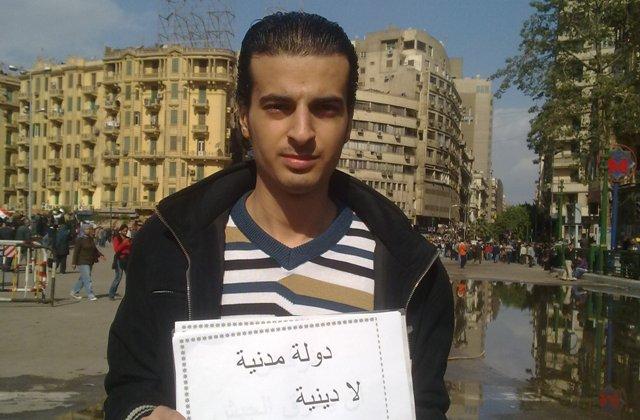 A military court on Wednesday postponed the re-trial of blogger Maikel Nabil until 14 December. This is the eighth postponement since the retrial began on 1 November.

Nabil has been on a hunger strike for 106 days and is surviving on water and milk. He is charged with insulting the military and spreading false information about the armed forces via his blog.
The verdict came as a disappointment to supporters who gathered outside the court chanting against military rule, a scene familiar from previous sessions of the trial.
“There is no legal justification for the delay,” said Ramy Ghanem, Nabil’s lawyer.
According to Ghanem, the only obvious reason for the delay is that the court wants to pressure Nabil into apologizing to the military.
The 26-year-old blogger wrote in a statement on Facebook in early November that a number of military officers asked him to write an apology to Field Marshall Mohamed Hussein Tantawi in exchange of his release. Nabil turned down the offer.
“The Egyptian legal system doesn’t recognize apology as a valid procedure for forgiving charges,” said Ghanem.
“But this is an exceptional trial, where anything is possible. The military judiciary is not independent because approval of the final verdict must be granted from senior military officers.”
Nabil has refused to cooperate with military prosecutors, in protest against the use of military courts in trying civilians. He asked his lawyers not to represent him in court. Ghanem, who was previously Nabil’s lawyer, is only acting as an observer during the trial. The military has appointed the blogger counsel against his will.
In April, the military court sentenced Nabil to three years in prison, but the Supreme Military Court of Appeals annulled the previous ruling in October and accepted a retrial on the same charges.
Earlier this week, the International Federation of Liberal Youth granted Nabil its “Freedom Award” in recognition of his “firm commitment to freedom.”
Mark Nabil, Maikel’s brother, told Al-Masry Al-Youm that his brother would escalate his hunger strike if he received another prison sentence.
“The military forces are prolonging Maikel’s hunger strike in order for him to reach the maximum limit [of his hunger strike],” Mark said.
Tweet
Pope Shenouda Article

Three main virtues must be involved in every virtue, like thread in rosary beads, without which a virtue shall not be considered a virtue. These are wisdom, love, and humbleness. Every virtue should be practiced prudently otherwise it may turn into something different or to a distorted form of virtue. Moreover, a virtue should include love for God, love for good, and love for others, or it will lose its value. And a