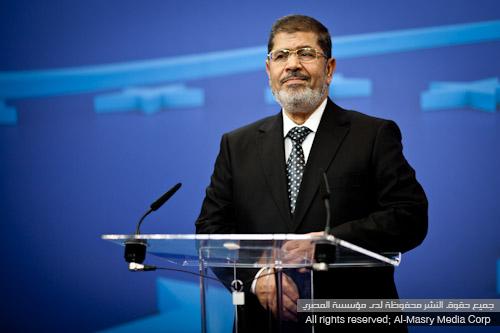 President Mohamed Morsy has appointed 90 members to the Shura Council, the upper house of Parliament, presidential spokesperson Yasser Ali announced on his official Facebook page on Saturday. The appointments include senior Muslim Brotherhood leaders such as Essam al-Erian and Sobhi Saleh and military figures such as Adel Morsy, the former head of the Military Judiciary Authority.

According to Ali, the 90 appointees include members of 17 parties, 12 of which did not have any representation in the dissolved People's Assembly. Appointees also include constitutional experts, eight women, 12 Copts, eight members of Egyptian churches, five members of Al-Azhar and two of the wounded of the revolution. Of party representatives, about 27 came from Islamist parties and about six came from non-Islamist parties with ties to the Brotherhood.

"In continuation of the national dialogue which the president is hosting, and the agenda of which includes important issues, and in the context of the efforts deployed during the fourth round of this dialogue whereby the selection criteria of Shura Council appointees were discussed, the president issued a decree appointing 90 members to the Shura Council, in accordance with the law," Ali wrote. He added that the appointees represent the diversity of Egyptian society, with civil society representatives, trade unionists, academics, legal experts, athletes, Sinai and Matrouh tribesmen and Sufi figures.

From the moderate Islamist Wasat Party, spokesperson Tarek Abdel Moneim, Atef Awad, Amro Farouq, Essam Shebl, Tarek al-Malt, Tarek Qereitam and Hussein Zayed were appointed, as well as Iman Qandeel, one of the eight female appointees. Mohamed Ahmad Youssef from the conservative Hadara Party, whose members ran in the parliamentary elections on the Muslim Brotherhood lists, was also appointed.
From the young Egyptian Current, many of whose members are Muslim Brotherhood defectors, Abdel Rahman Haridy was appointed.

From Al-Azhar's Senior Scholars Authority, Al-Qasabi Zalat was appointed, as well as Abdel Dayem Nosseir and Mohamed Abdel Samad who both teach at Al-Azhar University. Hussein Zayed, member of the Constituent Assembly and member of the International Federation of Muslim Scholars was also appointed, as well as former Grand Mufti Nasr Farid Wassel. Islamist journalist Talaat Ramih was among the appointees and so was Abdel Hamid Abdel Hafez of the Islamist Labor Party. Abdel Hady al-Qassby, who was appointed by toppled President Hosni Mubarak as the head of Sufi Orders to end a dispute over the position among other sheikhs, was also appointed to the Shura Council by Morsy.

From among liberal players allied with the Brotherhood, Ayman Heiba and Abdel Moneim al-Tounsy of Ghad al-Thawra Party and Tharwat Nafea of the Democratic Front Party were appointed. Also, the Christian businessman Ramy Lakkah, representing the Masrena Party, was appointed, as well as Mohamed Dessouky of the allied Reform and Development Party. Dessouky was a member of the formerly ruling National Democratic Party.

Military appointees include General Tarek al-Mahdy, who briefly handled state television during the rule of the Supreme Council of the Armed Forces, Kamal Ahmad Amer, who served in the Third Field Army and Mahmoud Ghoneim, who headed the Nasser Military Academy.

Independent Coptic columnist Sameh Fawzy was among those appointed, as well as Coptic lawyers Nabil Wassef, Nelly Yacoub and Mamdou Ramzy, and Suzy Nashed, who said she was recommended by the church for the appointment alongside Kamal Beshara, who also represents the Coptic Church. Nashed was previously appointed by the Supreme Council of the Armed Forces to the People's Assembly among the 10 lawmakers nominated by the council. She was also part of the Constituent Assembly but resigned when the church pulled out. Also among the appointees is Mona Makram Ebeid, a Coptic politician who is also a member of the National Council for Human Rights, from which several members have recently defected in opposition to Morsy's policies.

From Sinai, Ali Fereij, who heads the newly founded Arab Party for Justice and Equality, was appointed. Fereij was also the head of the Mubarak-controlled local council in Sinai for many years. Similarly, Fedeya Salem, a well known female lawyer and previously a member of Mubarak's local councils, was also appointed to the Shura Council by Morsy.

If the current constitution draft passes the referendum, the second phase of which was held Saturday, the Shura Council will be handed legislative powers until a new Parliament is elected. The lower house of Parliament was dissolved in June by a court ruling, when the Supreme Constitutional Court found that the law governing the house’s elections was unconstitutional.

With the appointments, the Shura Council will be composed of 279 members, a third of whom are appointed by the president.