Egyptian Opposition Vows to Fight On 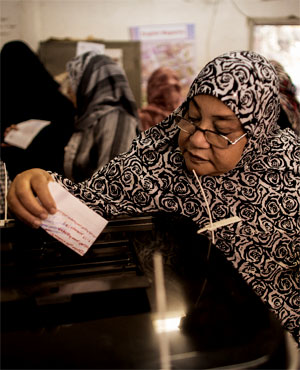 Egypt's opposition, facing defeat over a new constitution in a referendum this weekend, urged its supporters to reject the Islamist-backed charter and pledged to fight on to amend it during elections expected next year.

Forty-eight hours before the second round of the plebiscite, the main opposition coalition of liberals, leftist, Christians and secular Muslims called for a "no" vote against a document it views as leaning too far towards Islamism.
The first day of voting last weekend resulted in a 57% majority in favour of the constitution, promoted by President Mohammed Morsi as a vital step in Egypt's transition to democracy almost two years after the fall of Hosni Mubarak.
The second stage on Saturday is expected to produce another "yes" vote as it covers areas of the country that are seen as more conservative and likely to back Morsi.
The National Salvation Front, the main opposition coalition, said a "no" vote meant taking a stand against attempts by the Muslim Brotherhood, Morsi's political backers, to dominate Egypt.
"For the sake of the future, the masses of our people should strongly and firmly say 'no' to injustice and 'no' to the Brotherhood's dominance," the Front said in a statement.
A senior Front member, Abdel Ghaffar Shokr, head of the Popular Socialist Coalition Party, said that if the constitution was approved, the opposition would go on fighting to change it.
"That's why we will participate in the legislative election because it is the only way to amend the constitution," he said.
The constitution must be in place before elections can be held. If it passes, the poll should be held within two months.
Pyramid of democracy
In an attempt to mobilise voters, the opposition said it planned to hold public meetings, distribute flyers and send cars equipped with loudspeakers through the streets.
A street protest against the constitution in Cairo this week attracted only a few hundred people, well down on the numbers drawn to previous such events.
Islamist groups are planning a mass protest in Alexandria on Friday, a move likely to raise tensions a day before the vote.
The rally by the Muslim Brotherhood was called after a violent confrontation between Islamists and the opposition in Egypt's second city last week that ended with a Muslim preacher besieged inside his mosque for 14 hours.
The run-up to the referendum has been marked by often violent protests in which at least eight people have died.
UN Secretary-General Ban Ki-moon called for the final stage of the referendum to pass off peacefully so the country can focus on building "a pyramid of democracy in the heart of the Arab world".
"I sincerely hope there should be no further violence and the protest must be carried out in a peaceful manner so people will be free to express their views," Ban told reporters in New York on Wednesday.
Morsi and his backers say the constitution is needed to advance Egypt's transition from decades of military-backed autocratic rule. Opponents say it is too Islamist and ignores the rights of women and of minorities, including 10% of Egyptians who are Christian.
Demonstrations erupted when Mursi awarded himself extraordinary powers on 22 November and then fast-tracked the constitution through a drafting assembly dominated by his Islamist allies and boycotted by many liberals.
The referendum is being held over two days because many of the judges needed to oversee polling stayed away in protest.
Judicial authorities on Thursday named the judges who will supervise polling stations on Saturday. The opposition cited a lack of judges at some polling stations in a list of alleged irregularities in the first round.
In order to pass, the constitution must be approved by more than 50% of those voting.
Tweet
Pope Shenouda Article