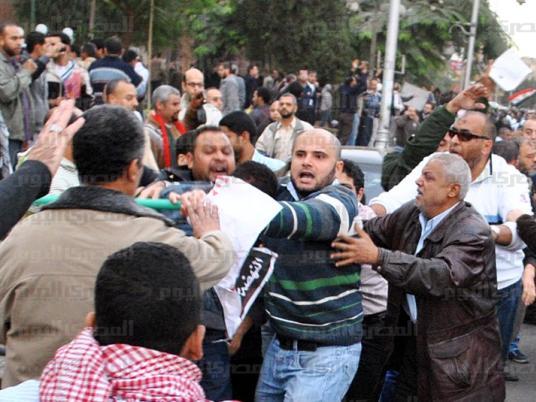 Egyptian Islamist groups are planning a mass protest in Alexandria on Friday, a move that will raise tensions a day before the final stage of a referendum on the new constitution that has split the nation.

The rally announced by the Muslim Brotherhood responds to a violent confrontation between Islamists and their liberal and secular opponents in the coastal city last week that ended with a Muslim preacher besieged inside his mosque for 14 hours.
The run-up to the referendum on the Islamist-backed constitution, billed as a major impetus for Egypt's democratic transition, has been marked by often violent protests in which at least eight people have died.
The first day of voting last weekend resulted in a 57 percent vote in favor of the draft, according to official media. The final stage on Saturday is expected to endorse that result as it covers parts of Egypt, particularly rural areas, even more sympathetic to the Islamist cause.
Last week's clashes in Alexandria involved protesters armed with clubs, knives and swords.
"What happened last Friday reveals the ugly face of secularism," said a spokesperson for the Muslim Brotherhood, the Islamist group which backed President Mohamed Morsy in his presidential election victory in June.
Opponents of Morsy staged protests in Cairo on Tuesday evening but numbers were down on previous demonstrations.
Several hundred protesters outside the presidential palace chanted "Revolution, revolution, for the sake of the constitution" and called on Morsy to "Leave, leave, you coward!".
Stone-throwing
A protester at the presidential palace, Ahmed Mahmoud, 24, said: "We are here to remind Morsy that we will not give up our revolution and won't leave until he leaves."
Shortly after midnight, a few hundred protesters who had planned to spend the night in tents set up around the palace were attacked with stones.
"Unknown people threw stones at us from behind the walls the army had built at all entrances to the palace, and some of the protesters were injured in the leg and head," protester Karim el-Shaer told Reuters.
If the constitution is passed, national elections can take place early next year, something many hope will help end the turmoil that has gripped the Arab world's most populous nation since the overthrow of Hosni Mubarak almost two years ago.
But the closeness of the first day of voting and the low turnout suggest more difficulties ahead for Morsy as he seeks to rally support for difficult economic reforms needed to bring down the budget deficit, such as raising taxes and cutting fuel subsidies.
Morsy and his backers say the constitution is needed to advance Egypt's transition from decades of military-backed autocratic rule. Opponents say it is too Islamist and ignores the rights of women and of minorities, including 10 percent of Egyptians who are Christian.
Demonstrations erupted when Morsy awarded himself extra powers on 22 November  and then fast-tracked the constitution through an assembly that is dominated by his Islamist allies and boycotted by many liberals.
The referendum has had to be held over two days because many of the judges needed to oversee polling staged a boycott in protest. In order to pass, the constitution must be approved by more than 50 percent of those voting.
Tweet
Pope Shenouda Article