Brawl over constitution in Beni Suef 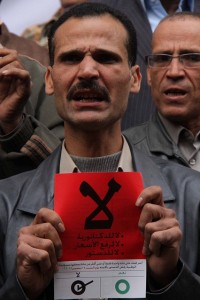 An awareness campaign advising people against voting for the referendum led to clashes in the city of Fashn, Beni Suef, Monday.

Anti-constitution protesters from the National Salvation Front (NSF) filed a report accusing Muslim Brotherhood and Freedom and Justice Party (FJP) members of attacking their march.
“The families of Fashn helped the protesters identify their assailants at the police station,” Walid Mohamed, an Al-Dostour Party member in Beni Suef who was with the protesters when they filed the report, said. Mohamed went to the station after being told that a group of protesters have been assaulted and trapped in Fashn Agricultural club.
“We decided to hold a march in Al-Mallah Street,” said Alaa Al-Din Shehata, another Al-Dostour Party member who took part in the march and witnessed the clashes which followed. He added that Al-Mallah Street is a known Muslim Brotherhood stronghold.
“As soon as we began raising awareness about the constitution’s shortcomings, the shop owners, mostly Brotherhood supporters, began cursing and attacking us,” Shehata said. The protesters responded by chanting against the Brotherhood’s supreme guide. The shop owners tore up anti-constitution flyers the protesters had distributied amid pro-Morsy chants and summoned a “thug” to chase them, Shehata said. He denied the presence of any prominent FJP or Brotherhood figures among the assailants; “only the Brotherhood’s militias were there.”
Mohamed, however, said a prominent FJP member tore up flyers they were distributing. “Then, two tricycles loaded with weapons arrived and their passengers chased the protesters.”
One protester, Mina Fathy, was injured, according to Shehata, who added that three more girls received superficial bruises. “When the assailants heard Mina’s name being called, realising he was a Copt, they specifically targeted him,” Mohamed Said, Mina being a common Coptic name.
FJP party secretariat in Beni Suef, Nader Qassem, denied any violent clashes. He claimed what happened was only “minor friction” between anti-constitution protesters and Fashn families.
“The families were upset because the protesters were chanting against the president,” Qassem said.
Qassem claimed that no FJP or Brotherhood members were present during the “friction.” He added that anyone with a problem usually holds the FJP responsible.
Anti-constitution campaigners have faced attacks elsewhere recently. Mohamed claimed he was also threatened by Salafis while campaigning against the constitution in a different district in Beni Suef.
Activists from the 6 April movement were also allegedly attacked by Salafis in Al-Khanka, Qaliubiya, while campaigning against the constitution. The movement released a statement saying two of its activists were severely injured in Salafi-led attacks in which knives and sticks were used.
Tweet
Pope Shenouda Article