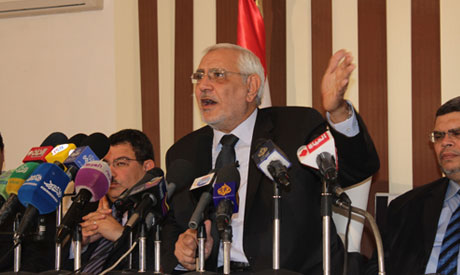 The Strong Egypt Party and its leader Abdel-Moneim Abul-Fotouh held a press conference on Thursday at Abul-Fotouh's residence in New Cairo to comment on recent developments, including the clashes that took place Wednesday night outside the presidential palace in Cairo.

"We hold the president responsible for the safety of protesters and we demand that President Morsi launch an investigation into the attack on the sit-in at the presidential palace that led to the clashes," Abul-Fotouh said. "I am against toppling the elected president, but at the same I am against the dictatorship of the president, even if he were Abu Bakr Al-Saddiq [Islam's first Caliph]."
Abul-Fotouh added that the president and the state should be held accountable for the clashes.
The former Muslim Brotherhood member advised young Islamists to avoid clashes and bloodshed. He also warned them against being used by politicians.
Abul-Fotouh also stated that Egyptians did not have a problem with Islamic Law, warning against changing the political battle into a religious one. He also warned against an attempted coup against "legitimacy," whether military or through foreign intervention.
"The United States will not rule Egypt," he added, warning "those negotiating with the American administration in the dark."
An official delegation headed by presidential aide Esam Haddad is currently in Washington prior to a scheduled visit by President Mohamed Morsi to the US capital.
"The presidential palace is owned by the people and it is not owned by the president or the Muslim Brotherhood; no one will protect the Egyptian president except the Egyptian people as a whole," Abul-Fotouh said.
The Strong Egypt Party has issued a statement demanding that the president call on supporters to leave the presidential palace area and on all parties to keep protesting peacefully. It also demanded that an immediate investigation into Wednesday's clashes be launched.
The press conference was held after Abul-Fotouh met with a number of Strong Egypt advisors and members, including former advisor to the president Seif Abdel-Fatah, who resigned from his post last night to protest the clashes.
Tweet
Pope Shenouda Article