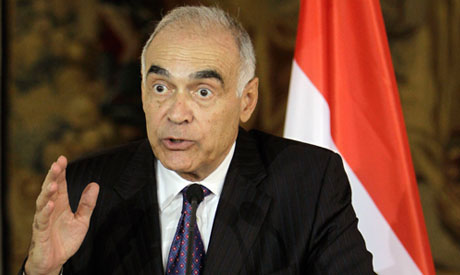 The past 24 hours have not been the easiest for Egyptian Foreign Minister Mohamed Kamel Amr. He has been receiving calls from key advisors to President Mohamed Morsi, including Muslim Brotherhood member Essam Hadad, the effective foreign policy decision maker, and Ambassador Rifaa Tahtawi, Morsi’s chief of staff. The angry questions and remarks relate to a communiqué that was issued and signed by close to 250 diplomats declining to participate in supervising the overseas referendum process for Egyptian expats on the draft constitution due Saturday ahead of the scheduled 15 December home referendum.

Amr, according to sources, has been appealing to diplomats to solicit “wisdom” from their colleagues. “He has been asking us to tell people that they should not be joining this statement because it violates the obvious bureaucratic commitment of the foreign service,” said a member of Amr’s staff. He insisted that “although I have not personally joined the statement, I am not going to be telling people what to do. If the minister wants to issue directives, he can do it."
Amr had not issued direct orders for diplomats to disavow the communiqué. However, he issued a statement through one of his aides insisting that the foreign ministry, as part of the executive, is committed to honour its duties, including supervising an overseas referendum for Egyptian expats on the constitution.
“Ultimately, if the president decides to go ahead with the Saturday referendum for Egyptian expats there would be enough diplomats to do the job,” said one assistant to the foreign minister. Indeed, he added that during the past day there have been “what amounted to quarrels” among members of some Egyptian diplomatic missions overseas over whether or not to boycott the referendum as some diplomats have decided to do.
According to a presidential source, the trouble with the boycott calling communiqué is the message it sends. “A very negative message of the executive declining to bow to the orders of its head, the president,” he said.
Some diplomats who signed the communiqué told Ahram Online that their purpose is not to defy the president. Insisting that none of them wished to depart from the consensual language of the communiqué, some said the purpose of their statement is to signal that the president needs to reconsider his position.
“We cannot be part of a referendum over a constitution that has shed the blood of Egyptians,” reads the communiqué.
This is not the first statement to be issued by a group of Egyptian diplomats declining presidential or ministerial orders. Only last month, a group of diplomats issued a statement declining directives of Foreign Minister Amr for them to support a controversial presidential decree issued 22 November that effectively froze the powers of the judicial branch and annexed some of its prerogatives to the president who already has legislative power along with executive power.
The 22 November constitutional declaration marked the beginning of the current political quagmire. “As diplomats, we are first and foremost Egyptians, and as Egyptians we decline the reintroduction of dictatorship,” said another signatory of Wednesday’s diplomat communiqué.
For one of the aides of President Morsi, it is specifically this rejection on the part of the executive corps that had originally prompted Morsi to issue his 22 November decree rendering his decisions immune to appeal.
“The president is being defied; the executive corps in large part is not bowing to his orders as its head, because they had wanted Shafiq (his presidential elections adversary),” said the presidential aide.
Aides to President Morsi say that Shafiq, the last prime minister of ousted president Hosni Mubarak, has large in-roads into the executive as in the judiciary, and he is trying to give Morsi a hard time.
But several of the diplomats who signed Wednesday’s communiqué say they did not vote for Shafiq neither in the first or the second round of the presidential elections in summer.
“The president cannot find any pretext for the kind of dictatorial decisions he has been making, one after the other. The ready-made accusation that this or that person is trying to reintroduce the Mubarak regime if he disagrees with the president has become overused to the point of being silly,” said a third signatory to the foreign service statement.
He said that it any defiance that Morsi has been facing from within the executive — adding “I am sure there has been some” — could have been dealt with without resorting to the “recent wave of extra-ordinary decrees.”
Some members of the foreign service openly joined the January 25 Revolution, with some taking time off from their overseas missions to join demonstrations in Tahrir Square.
Tweet
Pope Shenouda Article