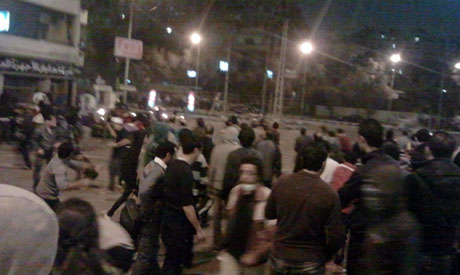 "We accept nothing short of the elimination of the constitutional declaration and a delay of the referendum on the constitution until a consensus is reached on the draft," said Nabila, a 73-year-old retired school teacher.

Walking back to her house from the demonstration on Tuesday evening before the presidential palace in Heliopolis, Nabila was neither short on anger against the president’s political choices nor on determination to maintain the demonstrations that aim to change them.
During the past two weeks, President Mohamed Morsi made two of the most controversial decisions of his less-than-six-month-old presidency: he issued a constitutional declaration that effectively put his decisions beyond judicial challenge, and he set the date for a controversial constitutional referendum for 15 December.
Nabila had never joined a demonstration before the one Tuesday evening. "I sympathised with the 25 January Revolution, but never joined it. Today, I cannot stay at home while Morsi is trying to reinstitute the worst of the rule of the previous regime."
Nabila says she does not want Morsi to step down. "We cannot be changing presidents every other year, but we are done with dictators. We want Morsi to change his style of governance. If he does not, he will have to be changed."
Calls for Morsi – Egypt’s first-ever democratically elected president – to step down were loud, but not predominant on Tuesday evening before the presidential palace. However, on Wednesday afternoon, as Vice-President Mahmoud Mekki was telling reporters of his ideas for finding an exit from the political impasse, supporters of the Muslim Brotherhood's Freedom and Justice Party (FJP) were arriving in large numbers to the presidential palace to oust dozens of anti-Morsi demonstrators who had staged a sit-in before the palace.
"But we are heading back in a short while; if they want to have a fight then it is up to them; we are taking a peaceful course," said Ghada, an accountant in her late 30s. "We made a mistake when we chose to boycott the second round of the presidential elections and the Muslim Brotherhood took that as a sign of apathy; now we are going to be on the ground."
The second round of presidential elections took place last June between Morsi, the Muslim Brotherhood candidate, and Ahmed Shafiq, the last prime minister of ousted president Hosni Mubarak. For Ghada, who voted in the first round for Hamdeen Sabbahi, the Nasserite candidate, as for many others including Nabila, who voted for Amr Moussa in the first round, neither runoff candidate was an acceptable option.
"Today, Shafiq is out of the country and Morsi is ruling, but he has to rule as a president of all Egyptians and not as a representative of the Muslim Brotherhood at the head of the state," Nabila said.
According to presidential spokesman Yasser Ali, the president's choices are decided strictly on what best serves the interest of the nation. And, as he added, it is in the interest of the nation to have stability through the adoption of a constitution that would be followed by parliamentary polls.
This process, according to statements made by Vice-President Mekki on Wednesday afternoon, would "relieve the presidency of legislative responsibility" and would automatically cancel the controversial constitutional declaration.
Mekki insisted that reaching a general consensus on the controversial draft constitution was not impossible if the opposition offered written proposals that could be compiled for the president's consideration – provided that "the referendum still takes place on time."
The alternative to this seems to be ongoing confrontation.
"The trouble is that Morsi went too far with the constitutional declaration; he was trying to abort what seemed to be an inevitable ruling by the administrative court to dissolve the constitution-drafting committee and the Shura Council – but he could have done it differently," said a Muslim Brotherhood member who asked for his name to be withheld.
He added that such a ruling would in effect derail the process of transition and "keep the country in a state of stagnation."
According to this young member of the country's oldest and most influential Islamist group, the way the constitutional declaration came out, and the way the political management has been run since, is not to the liking of all the Muslim Brotherhood leadership and "not to the liking of the Muslim Brotherhood youth" – the latter being the young Brotherhood cadres who chose to join the 25 January protests in their early days before the group's leadership had endorsed them.
For the younger generation of the Muslim Brotherhood, Morsi's political choices dovetail with what they perceive as the group's negative image as political opportunists. For some members of the group's leadership, according to this same source, the current confrontation with Morsi amounts to a de facto confrontation with political Islam – and it is unlikely to serve the interests of political Islam.
For Washington and other key Western capitals watching developments in Egypt, the current confrontation does not automatically rule out the support they extended Morsi upon his assumption of the presidency this summer. But despite this wait-and-see strategy, they have continued to advise Morsi to "discuss things with the opposition and reach an agreement."
Assurances offered by Morsi's delegation to Washington have been met with scepticism, but not with rejection, according to Washington- and Cairo-based sources.
The offer that Mekki made this afternoon without the approval of the president, according to one Morsi aide, is part of the reassurance campaign the president is working on. "But it would not fly and I told them it would not; the trouble is that the president is really being stubborn because he felt that he had already bowed to the demands of public opinion far too often and that if he did this again now he would be a puppet president – not to mention that his original cause would be defeated."
The tug of war, according to this aide (who has resigned but who has agreed to keep his resignation unannounced pending an end to the current crisis), would continue "and might actually get much worse" unless the opposition accepts Mekki's offer.
Tweet
Pope Shenouda Article