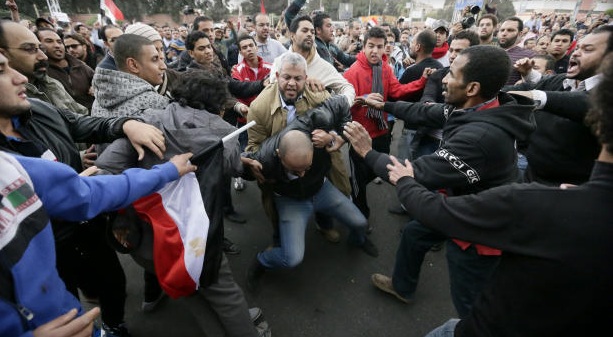 Egyptian President Mohammed Morsi's supporters and opponents clashed Wednesday outside the presidential palace in Cairo, pelting each other with rocks and fighting with sticks.

The clashes began when thousands of Islamist supporters of Morsi descended on the area around the palace where some 300 of his opponents were staging a sit-in.

Outnumbered by their attackers, the protesters were driven away from their sit-in location outside the palace's main gate and fled to side streets.

No casualties were immediately reported.

The clashes came just hours after Morsi returned to his Cairo palace, having left it through a back gate the previous evening as tens of thousands of angry protesters besieged the complex demanding he rescind decrees granting himself sweeping powers.

The Muslim Brotherhood, a powerful radical Islamic group which backed Morsi as a candidate and continues to support him vehemently as the president, called for the counter demonstration Wednesday in support of the Egyptian leader.

The president's Nov. 22 decrees and the adoption by his allies of a controversial draft constitution have plunged Egypt into its worst political crisis since president Hosni Mubarak's overthrow nearly two years ago.

CBS News correspondent Holly Williams reports tens of thousands of protesters poured onto the streets of Cairo and other Egyptian cities Tuesday night.

They called it a final warning to Morsi, who critics say is behaving more like a dictator than Egypt's first democratically elected leader -- a title he only gained in June elections.

At one point the crowd briefly broke through a police cordon, drawing tear gas fire from authorities, but it was mostly a peaceful demonstration.

The protestors are furious over the hastily drawn up draft constitution, which Morsi has said will be put to a national referendum on Dec. 15.

The committee that wrote it was controlled by President Morsi's Islamic hardliner allies. Many more liberal Egyptians say the draft constitution gives Islamic Sharia law too much prominence in the nation's new charter, and fails to protect minorities and women.