Salafis demonstrate before a Christian's house against performing Christian rituals! 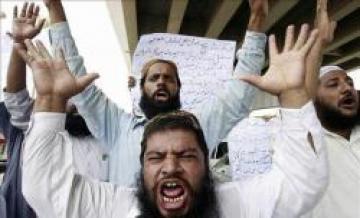 Ezzat Ibrahim, human rights activist, said that dozens of Muslims from Al Sawy village, Minya governorate, demonstrated yesterday in front of a Coptic Christian man's house named Mahrous Gaber Gendy, 59 years old, against performing Christian rituals and prayers in his house.
Before the Salafis leave, the man was forced by the police to sign an approval not to perform Christian rituals in his house without getting the due license and approval, which are almost impossible to get.
Tweet
Pope Shenouda Article