by the Calgary Herald 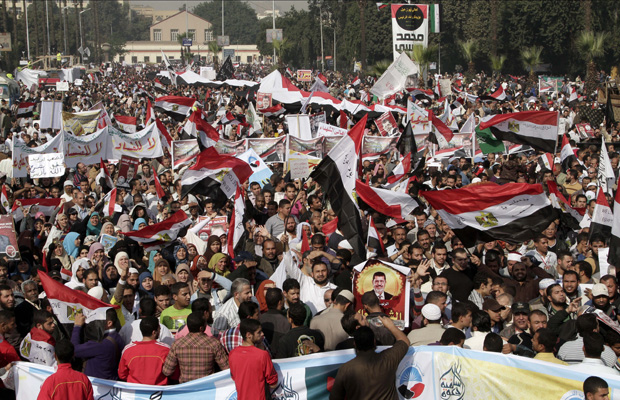 Egypt’s Arab Spring took another sharp, potentially ominous turn Saturday as Islamist supporters of President Mohamed Morsi and his controversial draft constitution handily won the battle of rival political rallies by bringing as many as 200,000 supporters to the gates of Cairo University.

The festive gathering served as a prelude to Morsi’s announcement late Saturday that the proposed constitution would be put to a vote on Dec. 15. The document was rushed through last Thursday and early Friday by an Islamist-dominated constituent assembly which inserted new Islamic references that the secularist opposition regards with foreboding.

After receiving the proposal, Morsi urged “all Egyptians,” no matter what their views, to take part in the vote.

Meanwhile, on the other side of the Nile, only about 20,000 secularists, liberals and Coptic Christians who have accused the California-educated Morsi and his Muslim Brotherhood of being dangerous radicals uninterested in democracy or compromise, staged a protest in Tahrir Square.

However, several angry opposition demonstrations last week had been much better attended. They were triggered by what the opposition regards as a dictatorial presidential decree Morsi issued on Nov. 22 that gave him broad powers and put him out of reach of Egypt’s courts.

Morsi has insisted the decree will no longer be valid once the referendum is approved or rejected and that it had only been issued to temporarily rein in the judicial system, which still has many members with close ties to the disgraced military regime of former president Hosni Mubarak.

Nevertheless, the Brotherhood demonstrated its vaunted organizational skills and its overwhelming support outside the capital by holding other large rallies across the country Saturday — something the heavily Cairo-based opposition does not even try to do except in the northern city of Alexandria.

“We showed that there is strong support for the president but we did not do this alone. We did it with the Egyptian people,” said Hassan Mohamad, who teaches engineering at a Cairo university.

“We are approaching an important milestone in the reconstruction of our society. We are doing the constitution now. Parliamentary elections (expected in mid-February) are next.”

As always, many of Morsi’s followers at Saturday’s rally sported thick beards, traditional Islamic dress and had dark marks on their foreheads sometimes known as “prayer spots” or “prayer bumps” that are caused when the head touches the ground when praying. Many women taking part were covered from head to toe in black robes, with only their eyes visible. Except for married couples and parents and children, the men and women rarely spoke to each other as they marched and shouted slogans such as “this is for Allah, not for worldly gain” and “Morsi: Stay Firm. We are behind you.”

Further underlining the profound religious and cultural differences between the two camps, few women at the secular rallies have had their heads covered and many have mixed freely with men in the crowd.

With Egypt so dangerously polarized by rival camps which are both confident of their morality and political strength, nerves that have been on edge during several years of dramatic upheavals are likely to become more frayed during the two week run-up to the referendum.

A foretaste of what may lie ahead was provided Saturday by teams of police in riot gear who placed themselves between the competing groups, who together ousted Mubarak and his military dictatorship last year but have always had sharp ideological differences about Islam’s role in government. Mercifully, despite deep concern that there might be violence, the day passed without any significant clashes.

“There is a certain sense of danger and violence is possible because of irresponsible behaviour of media engines whose alarmist reports could provoke a lot of people,” said Sameh Elagomawy, a 54-year-old artist who is not a member of the Muslim Brotherhood but had come to Cairo University to show his support for Morsi and his plans for the constitution.

There is no question that Egypt’s 83 million people are deeply divided over the constitution and almost everything else that touches on how the government should be run.

Both sides have accused the other of plotting against them. Neither group seems interested in compromise. Moreover, their differences have been exacerbated by a newly freed media, which often encourages inflammatory talk.”

Morsi’s opponents have accused him of “a naked power grab,” that threatens Egypt’s nascent democracy.

They have demanded that the president withdraw the decree granting himself greater powers and compromise on the constitution in areas such as women’s rights and free speech and threatened that they would force him out of office only five months after he won Egypt’s first democratic elections since 1952. In such a tense atmosphere any small miscalculation or misunderstanding could spark bloodshed.

“We are all afraid of trouble,” said dentist Ahmad Gamal, who is 27. “Every section of society must tell their demonstrators that they must express themselves peacefully. There must be compromise and it should be led by leaders of the factions.”