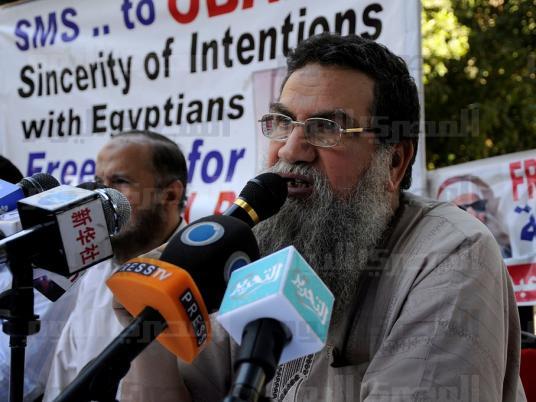 Jama’a al-Islamiya senior leader Nageh Ibrahim has warned that liberal political figures may be targeted for assassination during the next month.

In an interview with London-based Asharq al-Awsat, the senior figure from the once-banned Islamist group said that the assassinations would come as a result of the increasingly tense political atmosphere, speculating that the assassinations would be carried out jointly by the ruling regime and Islamists.
Ibrahim also expressed support for Morsy’s recent decision granting himself sweeping powers, saying, “Morsy had to take those decisions. He will never retreat.”
He also called on Morsy and his supporters to take on a more inclusive approach to governing, saying that the president failed to include liberal politicians and political movements in his coalition.
“If Morsy had asked [liberals] to take part in the Hesham Qandil Cabinet, they wouldn’t have reached such a degree of enmity with him. He kept them out, despite their participation in the 25 January revolution,” he said, adding that political parties should prioritize national interests to reduce the risk of violence and political division.
He added that Morsy should not lead the country exclusively from the Muslim Brotherhood’s point of view, saying, “Islamist movements governing the country should be leading through the mentality of the state. They should allow others to participate even if they are different.”
Major conflicts have taken place between Islamists and liberals over the constitution draft, and the split has widened since Morsy’s constitutional declaration Thursday immunizing the Constituent Assembly against court rulings.
Tweet
Pope Shenouda Article