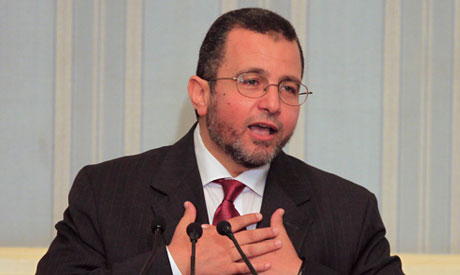 Qandil went on to stress that the government would "use the law" in dealing with "protesters' violent activities."
"The government will take all necessary steps to deal with attacks on public and private property," he said.
He also stressed that the government would continue to guarantee freedom of expression and the right to stage peaceful protests.
The Egyptian PM went on to urge the media to report on current events "objectively" and abide by journalistic ethics.
"The people must know that these Molotov cocktails are being used to burn our country," he said. "Revolutionary demands can only be achieved by work and production and nothing else."
Since Monday, clashes between police and protestors have been ongoing on Mohamed Mahmoud and Qasr El-Aini streets, adjacent to Cairo's Tahrir Square. According to the latest health ministry figures, over 43 protesters have been injured, although reports from the field suggest the number may be higher.
Fighting erupted during a demonstration commemorating the victims of last year's five-day street battle with police in the same area, which left 47 dead and hundreds injured.
Tweet
Pope Shenouda Article