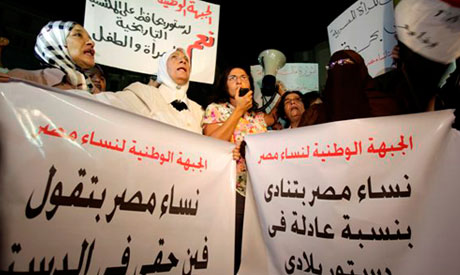 The possible elimination of Article 68 of Egypt's draft constitution has raised an open-ended debate over Egypt’s commitment to, or the lack of, basic women’s rights. The alleged removal of the article prompted positive reaction in many feminist and diplomatic quarters in and outside of Egypt.

Article 68 of the draft constitution stipulates that the state will guarantee gender equality in political, cultural, economic and social life as long as it does not contradict the "provisions of Islamic Sharia". The last phrase of the article, as rights activists see it opens the door to discrimination against women in the name of religion.
Some concerned government officials who have been receiving endless queries and criticism from concerned world organisations, including some key UN bodies, and world capitals told Ahram Online on Thursday that they were relieved by the news and have been sharing it at a very wide scale.
“I know that it is not entirely a done deal, but I am told upon very good authority that it is almost removed,” said one official.
The article was seen in many feminist and activist quarters as the beginning of an institutionalized backlash on women’s rights. In the analysis of some, the backlash has already been put in motion, following the removal of the regime of Hosni Mubarak that offered some support to women’s rights.
“It is one thing for officials to be overlooking the laws and acting against women’s rights and it is another for the constitution of a great country like Egypt to include language that opens the door for a systematic discrimination against women in legal and societal rights,” said Inas Mekkawy, Founder of Bahiya, a recently established feminist organization.
“Today, we are celebrating," she added.
The sigh of relief that is echoed in many governmental and non-governmental bodies is also being made in the offices of some Western diplomatic missions in Cairo, as in some Egyptian embassies in key world capitals.
“During the past few days we have been inundated, literally, with endless queries about this and other articles in the draft of the constitution,” said an Egyptian ambassador in one of the closest Western capitals to Egypt.
According to the account of this ambassador and other overseas Egyptian diplomats, as well as Cairo-based Western diplomats, the key volume of questions raised on the draft constitution relates basically to freedom-related matters. The bottom line of the questions was about whether or not Egypt is turning into a “radical state” or would continue to be “a modern state” – even if “more conservative.”
“When you have a regime that we all knew was not democratic replaced with an elected regime that goes back on some basic human rights, whether in relation to women or other minorities, you must be alarmed,” said a Cairo-based foreign diplomat.
The worst-case scenario for the West is what some diplomats qualify as "the Iran scenario," an Islamist country of sorts.
“Yes, there is so much in the discourse of (President Mohamed) Morsi that gives room for serious questioning over his true commitment to preserving the modern face of Egypt,” said another foreign diplomat in Cairo.
She added, “But what is more important than the president, who presumably is not ruling for life anymore, is the constitution itself. From what we saw the drafts were sowing the seeds of a reactionary and closed society, maybe another Iran or maybe not, but reactionary for sure.”
In the assessment of both foreign diplomats in Cairo and Egyptian diplomats in overseas missions, the chances for Egypt to gain a serious world commitment in terms of investments and other forms of economic cooperation depend essentially on the stability of the country.
“If we have a country where civil or secular groups, depending on who is calling them what, are at clash with the Islamist groups that are currently dominating the political scene, then that is not exactly good news for foreign investors. It simply means that we are a country in conflict – possibly an intense conflict,” said another West-based Egyptian ambassador.
The question is not just about Egypt’s commitment to basic freedoms and liberties, but equally to the state of stability or the lack thereof, which is only a product of the ability to secure a consensus on the constitution and other key matters, he said.
The same diplomats, who spoke to Ahram Online on condition of anonymity, agreed that the debate over the constitution revealed that the civil forces cannot be easily marginalized by the much stronger and more organized Islamist trend. For many Western quarters, both governmental and non-governmental, this is as a positive and healthy sign.
According to lawyer and activist Ahmed Hishmat who has been engaged in the debate over the constitution, “it is very clear this debate granted the liberal forces a new profile.”
The Islamist trend is reiterating statements on the commitment to apply all the details of Islamic Sharia (rules and regulations that allow for varied interpretations) without clarity or specificity of the meaning, Hishmat stated.
“The Sharia related statements are too vague and while they might have an appeal, at a first glance for some, they still fail to answer key detailed questions on, for example, how the application of Sharia influences the performance of the Ministry of Health and Education,” he said.
Hishmat added that for their part, the civil-liberal forces speak in details that citizens could grasp, “whether or not they would agree is of course another matter.”
At the end of the day, Hishmat argued that the final draft of the constitution could have a higher Islamist influence. Yet, given that they are the stronger political force in Egypt the draft would not be entirely an Islamist text due to the success of the liberal forces to act in coordination. He expects the draft to be put for a referendum before the end of the year.
A predominantly, but not strictly Islamist constitution is something that many Western diplomats in Cairo say is expected and assess would be accepted by the Egyptian society in general. This, they add, is something that could dispel some of the unannounced concerns that key world capitals seem to harbor over the true fate of Egypt – ultra-Islamist or not.
Tweet
Pope Shenouda Article