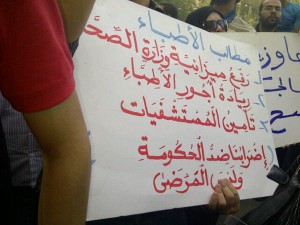 Marking their 37th day of striking, a group of striking doctors organised a symbolic funeral for health in Egypt on Thursday afternoon.

Hundreds marched from in front of Omar Makram Mosque in Tahrir square, making stops at Mohamed Mahmoud street and Abdel Mone’m Riadh square before reaching the Maspero building.
A symbolic tomb wrapped up in white, with the word “health” written over it and a black ribbon decorating one of its corners, lay on the floor in front of the Omar Makram Mosque.
Chants included; “the wolves get the budget while the hospital becomes a ruin,” “the people demand the patients’ rights,” “stadiums are protected with tanks while hospitals are left without gates,” “patients get killed and the minister of health is responsible for their death,” and “the strike is our weapon against a ministry which is slaughtering us.”
The march started when the participants carried the tomb. Before moving, they recited the first chapter of the Quran, chanting “there is no God but Allah, the health has passed away.” The acts are part of the religious processions usually carried out in Muslim funerals.
“We’ve been on strike since October first, yet with no response whatsoever,” Dalia Zaghloul, a female doctor who took part in the funeral, said. Like her fellow doctors, Zaghloul was dressed in a white doctors’ coat, with a black ribbon horizontally dangling down her shoulder. The words “the funeral of the Ministry of Health” were written on the black ribbon.
Zaghloul was carrying a banner outlining the doctor’s demands; increasing the health budget, providing doctors with fair payment, and securing hospitals against attacks.
“Striking doctors have been receiving threats and punishments from the managements of the hospitals they work for,” Zaghloul said, claiming the management’s actions were dictated by the Ministry of Health.
Several political movements took part in the funeral such as, 6 April movement, the Revolutionary Socialists, the Revolutionary Democratic Union, the Egyptian Socialist party and the Socialist Popular Alliance party (SPAP).
“I’ve been working abroad as a doctor for the past 25 years,” Enas Abul Fadl said, “I couldn’t stand the doctors’ working conditions here in Egypt that’s why I travelled abroad upon graduation. Yet, this youth doesn’t want to do like I did; they don’t want to escape but to serve here in their country and receive their rights. That’s why I’m in solidarity with them.”
The doctors have been on partial strike since 1 October after the decision to strike was taken by the general assembly of the Doctors’ Syndicate on 21 September. The doctors have three demands: the enforcement of more strict security laws and harsher punishments for people who attack hospitals, an increase in the state health budget to 15 per cent of the total budget, and the raising of the doctors’ salaries to EGP 3,000. Ultimately, the doctors want to be able to offer patients better health services. The strike includes state-run hospitals but not police, military, or university hospitals.
Tweet
Pope Shenouda Article