Egyptian shops, restaurants to close at midnight, 2am 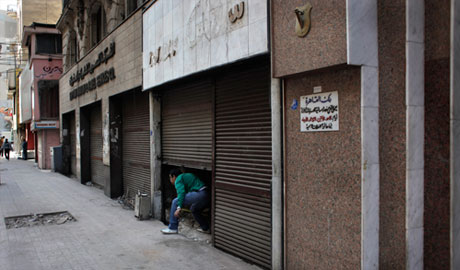 Egyptian shops and restaurants will be allowed to remain open until 12am and 2am respectively according to draft legislation prepared by the government, official news agency MENA reported on Monday.

Following a meeting with the heads of Egyptian chambers of commerce, Industry Minister Hatem Saleh said the new closing times would be suitable for both shop owners and customers.
"The prime minister authorised me to handle this initiative last week," Saleh told Ahram Online by telephone. "And I've spent the last 48 hours working on it until reaching agreement with traders."
Saleh replaced local development minister Ahmed Zaki Abdeen, who had been tasked with leading a government initiative to institute earlier closing times for shops.
On Thursday, Abdeen announced that the controversial decision – which was initially met with significant public opposition – had been delayed "until further notice."
According to Saleh, the new closing times – listed below – will come into effect on 1 December.
For all workshops in rural and urban districts (except automobile maintenance) will have to close their doors at 9pm.
In rural villages, shop owners will have to reduce their electricity consumption at 9pm and close their doors at 11pm.
For shops located in urban areas, owners will have to reduce their electricity consumption at 10pm and close their doors at 12am.
Pharmacies and petrol stations, meanwhile, will have to reduce their electricity consumption at 9pm in rural areas and 10pm in urban areas. They will be permitted, however, to remain open around the clock.
Restaurants and cafes in both villages and cities will have to reduce their electricity consumption at 12am and shut their doors at 2am.
According to the new legislation, citizens will be able to make purchases at these retailers – while the latter can offer delivery services – after the abovementioned times. Customers will not, however, be allowed to stay in these venues after official closing times.
Saleh stated that shops, cafes and restaurants would be exempted from the compulsory closing hours on weekends and on official holidays, when they will be free to open and close whenever they want.
Last month, the government had called for all shops to be closed at 10pm in order to conserve electricity. The new rules, however, which were meant to go into effect on 1 November, proved unacceptable to much of the public.
According to government officials, the previous scheme was supposed to save the country up to LE6 billion (roughly $1 billion) a year in electricity costs, but it is unclear how much the redrated scheme will reduce electricity consumption.
Tweet
Pope Shenouda Article