Why do you strike Me?

It's the way of Christ Himself who said: Why do you strike Me! Jesus said to one of the officers who stood by during his trial and struck Him with the palm of his hand: “If I have spoken evil, bear witness of the evil; but if well, why do you strike Me?” Jesus was denouncing the action of striking him without a cause. This should be applied by all Christians when they face oppression or prosecution for no good reason. Jesus showed us how to refuse the oppression and prosecution peacefully, and not just keep silent as many people think.

Such people believe that we should keep silent and never object that God may defend us! They take it to the next level by repeating over and over the verse: “But whoever slaps you on your right cheek, turn the other to him also” (Matthew 5) and ignore what the LORD Himself did, as he didn't apply it literally. He would have never taught us to be so subservient or servile till the end even if we got struck or even killed. This is so wrong and too far from our Christian teachings.

On the other hand, I want to stress: this doesn't mean to use violence against our governors or even enemies. In fact, we don't accept violence at all. Moreover, violence never solves a problem, but rather intensifies it. Martyrs should never use violence in order to be considered martyrs.

Here it becomes very confusing: What is the best way to deal with injustice and oppression? The answer simply is: Why do you strike Me?

We have to talk and refuse like Jesus did. John the baptist announced: “It is not lawful for you”, and St. Paul who, being a Roman citizen, refused to be whipped against the law. Nobody can claim that St. Paul have refused to be prosecuted for the sake of Christ. It was rather to teach us the peaceful struggle.

I wonder that some people refuse to consider Maspero martyrs as real martyrs because they demonstrated to demand their rights against an unfair governor who is in fact so lucky to have such subservient people in the church.

I tell those people: when we demonstrate against this unfair governor, we love him more than you, as we teach him about his injustice that he may repent and be saved. This peaceful struggle is the biblical way to save such governor. Moreover, demanding a punishment for him may save his eternal life as well.

I know that such ideas may be strange for many Christians, but I assure you: It's the way of Christ Himself who said: Why do you strike Me! 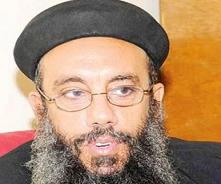