Islamic Shariah Declared Source Of 'Legislation' Not 'Law' In Egypt 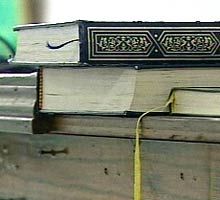 The aspiration of newly elected President of Egypt Mohammad Morsi of keeping Egypt a Secular State gets fulfilled as the 'Council' comprising of political parties and law experts, responsible for 'Constitution making' declares Islamic Shariah as the fundamental source of legislation but also stating that the State or any institution of the State would not be allowed to intervene in the matters of the religion. Thus, separating the matters of State from the matters of religion, upholding Secularism in the country.

It is very unfortunate that Islamist in Egypt have not taken a lesson from Pakistan’s constitutional history. Pakistan’s constitution which was written in 1973 clearly mentions that no law contrary to Islamic injunctions will be legislated. However, after almost forty years Pakistan is still far away from implementing Islam completely in all the aspects of life.

Similarly instead of saying that Quran and Sunnah will be the only source of ‘law’, Egypt’s Islamist government opted to say that Islamic Sharia will be basic source of ‘legislation’.

This statement will provide the reason for all un-islamic laws to remain or become as the law of the land because they have not said that Sharia will be the only source of law.

Furthermore, they have accepted the un-islamic notion of separation of religion and the state when they amended a law and defined that no organ of the state will interfere in religious matters.

It means that Salah, Hajj or moon sighting are religious matters but economy, ruling, judiciary, foreign policy and education are non-religious matters. That is why they have agreed to take 4.5 billion dollar IMF loan, announced that Egypt will remain a secular state and also announced that Egypt will continue to honor Camp David pact with Israel.

This is only the reason they announced that Beach resorts will further developed and they did not expel American and western diplomats when these states defended the right to slander Prophet (s.a.w).

So far it has been proved more then once in the short history of Egyptian Islamist government that Islam can not be implemented gradually and through democracy. Islam could only be implemented comprehensively and radically through its own Ruling system which is Khilafah.