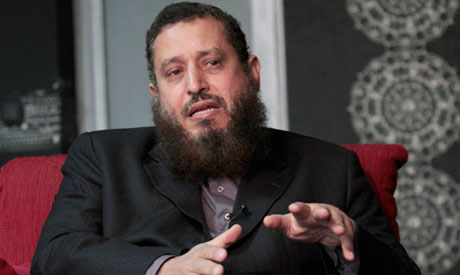 Emad Abdel-Ghafour was reappointed president of the Salafist Nour Party following ten-hour internal crisis talks which finished in the early hours of Saturday morning, over a week after the former leader was sacked by the party's Supreme Committee.

Party Spokesperson Nader Bakkar, whose own job was on the line after Abdel-Ghafour's faction reactively attempted to sack him Wednesday, confirmed via his Twitter account, 3am Saturday, that the crisis had been resolved during the extended meeting.
"The Supreme Committee has reassigned Mr Abdel-Ghafour to the position of head of the party, after Mr. Mostafa Khalifa relinquished his position," Bakkar wrote on the micro-blogging website. "An agreement was reached to hold the party's internal elections as scheduled. The Supreme Committee has also scheduled 11 October, 2012 to hold its General Assembly plenary."
The Salafist Calling, an influential ultraconservative preaching movement based in Alexandria, reportedly brokered the "successful" deal by mediating between the warring factions, Bakkar added.
Reports of rifts among the party's upper echelons emerged in recent weeks.
The situation reached a dramatic climax last Wednesday when the party's Supreme Committee withdrew confidence from its leader Abdel-Ghafour and appointed El-Sayed Mostafa Hussein Khalifa in his place.
Abdel-Ghafour and his supporters – known as the "Reformist Front" within the party - reportedly retaliated by calling for the dismissal of Supreme Committee members, including Bakkar, via the party's official Twitter account.
The Supreme Committee convened last Monday without Abdel-Ghafour and with Khalifa as the recognised head, where it reiterated its decision to hold elections on schedule and to withdraw confidence from Abdel-Ghafour.
The ousted leader had previously demanded that the internal polls be postponed until Egypt's new parliament is voted in, thereby safeguarding his position until the end of the year. Abdel-Ghafour and his supporters consequently filed a lawsuit to halt the Nour Party elections.
The official reason the committee gave for forcibly resigning their leader was because he accepted a position on Mohamed Morsi's presidential team.
Tweet
Pope Shenouda Article