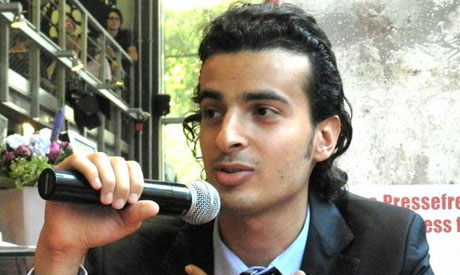 Egyptian blogger and staunch military critic Maikel Nabil said those who died during Egypt's 1973 war with Israel were not martyrs and should not be celebrated, in a controversial tweet on the 39th anniversary of the historic event, Saturday.

"The soldier who dies in war is not a martyr," Nabil said on the micro-blogging website, "he is just a potential killer who is out to put down people he does not know. No commemoration for killers."
On 6 October 1973, the Egyptian army defeated its Israeli counterpart, an achievement which later instigated the liberation of the Sinai ‎Peninsula that had been occupied by Israel for six years.
Every year, Egyptians ‎commemorate the day, which is considered to be an  important historic victory.
Nabil is renowned for his criticism of the Egyptian military and positive stance on Israel.
He was arrested in March 2011 and jailed for 10 months on charges of insulting the armed forces after writing a blog post entitled “The army and the people were never one hand,” one month after the military junta assumed power.
Nabil, who strongly opposed the interim military rule, was initially handed a sentence of three years in prison, which was reduced to two years following a retrial.
He went on hunger strike in August 2011, consuming only juice and milk. This escalated on 18 December when he refused all forms of nourishment before ending his strike on 31 December.
Nabil was freed just ahead of the January 25 Revolution’s first anniversary after former field marshal Mohamed Hussein Tantawi absolved him.
Tweet
Pope Shenouda Article