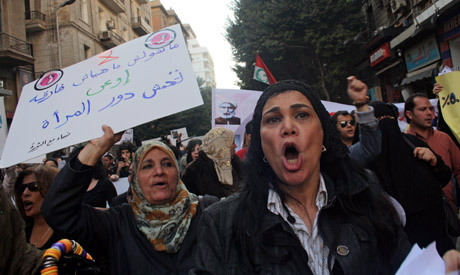 A coalition of 33 women's rights organisations and initiatives are set to march from Merghani Street in Cairo suburb Heliopolis to the presidential palace, 6pm Thursday, to submit a document to President Mohamed Morsi outlining rights they want enshrined in the upcoming constitution.

The protesters will then be joined by representatives from three political parties, the Egyptian Social Democratic Party, the Constitution Party and the Egyptian Socialist Popular Alliance Party, in forming a human chain outside the presidential accommodation.
In a joint statement signed by all participants, the coalition demands that a law criminalising sexual harassment be included in the upcoming constitution currently being drafted.
The statement calls on institutions, political parties, public figures and anyone "who believes in the cause" to take part in the vigil, as well as demanding that all Egyptian media cover the event.
"The struggle for Egyptian women's social, economic and political rights is not a new phenomenon, it is not a fad or importing ideas from the West as opponents of women's freedom and progress in society say it is" the statement stated. Women's rights, it continues, are an "integral part of human rights" adding that there is a long history of women's efforts, alongside men, that were central to standing up against colonialism.
Groups taking part in the march include The Egyptian Women's Federation (a coalition of 15 organisations), The National Front for Egypt's Women, The Association for the Development and Enhancement of Women, and the Egyptian Foundation for Family Development.
Recent initiatives working to track and eliminate harassment of women in Egypt will also attend including Fouda Watch initiative "Let's Write our Constitution" and The Popular Campaign against Sexual Harassment.
Government-sponsored organisation National Council for Women is also expected to take part in the march.
Tweet
Pope Shenouda Article