Egyptians refuse to be erased 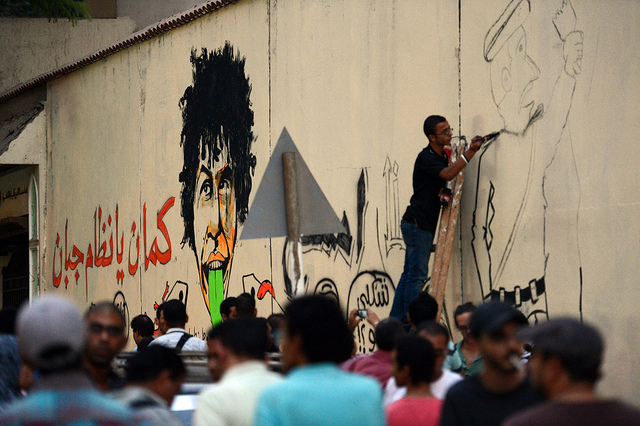 Late Tuesday night, graffiti on the walls of Mohamed Mahmoud Street in Cairo were painted over following a government order. Nazly Hussein documented  the incident below on the video streaming site Bambuser. The footage shows a man painting over the graffiti while Egyptian Central Security Forces (CSF) overlook the process.

The whitewash follows a Saturday inspection  of Tahrir Square by Egyptian Prime Minister Hisham Qandil. The inspection later prompted additional clean-up measures around the square. Some Egyptians criticised the clean up of the square, citing double standards and poor governance by the Morsi administration.

Egyptian citizens lamented the loss of the graffiti, which depicted slogans, images and memorials to heroes of the revolution.

Egyptian netizens lamented the loss of the graffiti, which depicted slogans, images and memorials to heroes of the revolution.

After the graffiti was removed, within hours, Egyptians headed to the street to paint on the blank walls.

New messages on the walls expressed nostalgia for the revolution and defiance against the Morsi government and security forces. The message below reads, "you erased the picture of the one who died in Port Said before bringing justice for every martyr".