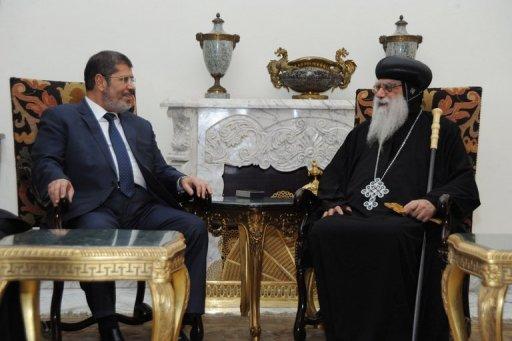 The interim head of Egypt's Coptic church has expressed unhappiness over the composition of the country's new Cabinet, with only one Copt given a minor portfolio, reports said on Saturday.

Bishop Pachomius, who temporarily assumed the reins of the church when Pope Shenouda III died last year, also criticized the security forces for inaction during Muslim attacks on a church and Christian homes this week.
On Thursday, President Mohamed Morsi, who had pledged to include Coptic representatives in his government, swore in a cabinet that included only one Christian.
"The ministerial line-up is unfair to the Copts, especially given that we expected an increase in the representation of Copts," he was quoted by independent daily Al-Shorouq as saying.
"In the past, there were fewer ministries... and there were two or three Christian ministers," another independent daily, Al-Tahrir, quoted him as saying.
"Today, after the number of ministries has increased, there is only one Christian minister, for scientific research," which he characterized as a "semi-ministry."
Nadia Eskandar Zukhari is not only the sole Copt in the cabinet, but only one of two women.
Claiming that Copts represent 14 percent of Egypt's 82 million people, Pachomius said there should be four Christians in the cabinet. Generally accepted estimates put the percentage at between six and 10 percent.
Pachomius' remarks were published a day after a senior bishop complained about the line-up, while also saying attacks on Christians were on the rise.
"The general climate is turning against Christians," said Bishop Morcos. "Assaults on Christians have increased," he told AFP.
On Wednesday, clashes between Muslims and Christians in Dahshur injured 16 people after a Muslim man died of his wounds from earlier clashes.
Pachomius blamed the security forces for "standing with their arms crossed" during this week's violence.
Dozens of Copts have died in sectarian clashes since a popular uprising overthrew president Hosni Mubarak early last year.
On Monday, the United States warned that despite gestures by Egypt's military towards greater inclusiveness, sectarian tensions and violence had risen.
Washington's 2011 International Religious Freedom Report expressed concern over "both the Egyptian government's failure to curb rising violence against Coptic Christians and its involvement in violent attacks."
The Copts were also the target of sectarian attacks before Mubarak's ouster.
Muslim-majority Egypt has for decades been marked by deep sectarian tensions, with violence between Muslims and Christians often sparked by disputes over land or love affairs between members of the two communities.
In January 2011, a suicide bomber killed more than 20 Christians outside a church in the country's second city Alexandria.
In October, 25 people, mostly Copts, were killed and scores injured in clashes between troops and protesters as Copts held a demonstration against an attack on a church the previous month.
Witnesses said soldiers fired on protesters and ran them over with armored cars, accusations the military has denied.
Tweet
Pope Shenouda Article