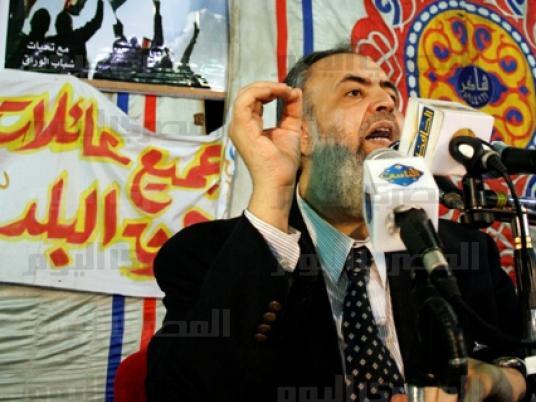 A spokesperson for the disqualified presidential hopeful Hazem  Salah Abu Ismail said Saturday that the conservative preacher plans to launch a political party in the coming weeks.

Gamal Saber said Abu Ismail is holding intensive meetings with supporters in different governorates, putting the final touches on the political party he intends to launch by the end of Ramadan.
"The party stems from a religious socio-political renaissance project," Saber said.
He added that Abu Ismail would not run in the parliamentary elections and would only act as chairman of the party. He said leaders had yet to decide on a name.
"There are a number of names put forward for the party, including 'Pride,' 'Freedom and Dignity', 'Honor and Dignity', 'al-Ansar' and 'Shariaa and Approach,' " he added.
He said the fledgling party plans to contest the parliamentary elections in all constituencies and is ready to make an alliance with both the Nour Party and the Freedom and Justice Party.
"There is no problem with forming an electoral alliance with Nour Party and the Muslim Brotherhood," he said.
Saber said that Abu Ismail is preparing to launch a satellite channel that represents the party's ideas and project.
Tweet
Pope Shenouda Article