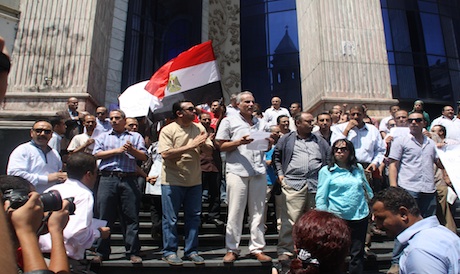 About a hundred journalists from various state-owned newspapers protested in front of the journalists' syndicate on Tuesday afternoon, objecting to interference by the Shura Council (the upper house of Egypt's parliament) in the Supreme Press Council, which is responsible for appointing editors-in-chief of state-owned media.

Journalists chanted: "Don't be afraid and say it, the Shura must leave," "[President] Abdel Nasser said it long ago, the Brotherhood should not be trusted," and "They removed Safwat [El-Sherif, ex-secretary general of the NDP and former head of Shura Council] and brought us Fahmy."
Tuesday is the first day in which candidates for editor-in-chief positions in the country's national newspapers must register, as announced at a press conference on Sunday.
A sub-committee of the Shura Council is responsible for selecting and appointing editors-in-chief and boards of directors for state-owned news organisations. Protesters argue that during Mubarak's presidency, the body used this authority to appoint those who would serve the regime's agenda, and since the Shura Council is currently dominated by Islamists, they fear that newly-appointed editors-in-chief would serve the Islamists' agenda.
The upper house of Egypt's Parliament, which is dominated by the Muslim Brotherhood's Freedom and Justice Party (FJP) and the Salafist Nour Party, oversees the press council.
Other journalists were also present at the protest, objecting to its message. One man shouted: "Shame on you people! Morsi has been a president for only a few days!" while a woman asked: "What is your problem? Do you want those spoiled editors-in-chief to remain in power?" which caused tension between both sides.
Khaled Dawood, journalist at Ahram Weekly newspaper, said that they had decided to hold their protest in the interests of the independence of the media, as "what is happening now is the same as Mubarak's National Democratic Party system and tactics, where people in authority appoint their relatives and friends."
Dawood is worried that since the Shura Council's speaker Ahmed Fahmy, who supervises theSupremePress Council, is President Mohamed Morsi's relative and a leading member in the Freedom and Justice Party, new editors-in-chief will be chosen that serve the interests of those in power.
Dawood believes that there should be a general assembly in each newspaper responsible for appointing the editor-in-chief, with no interference from parliament.
Alaa El-Attar, a member of the journalists' syndicate board, believes that the question of who the editors-in-chief are is onlya sub-issue of the main problem - that the entire system is corrupt.
"The Supreme Press Council's rules all needs to be changed and reformed. We need reform of the entire system. Even if the prominentveteran writer and journalist Mohamed Hassanein Heikal was appointed editor-in-chief tomorrow morning, the system would still be the same," El-Attar said.
Journalist Fatma Shaarawy, who works at Al-Ahram newspaper, said that it does not make any sense that the Shura Council has such authority to appoint editors-in-chief. She argues that journalism should be independent, in the sense that newspapers have independent general assemblies responsible for that matter."
Sayed Abdel Khaleq, who is a journalist at Akhbar El-Yom newspaper, agreed with Shaarawi, adding that the terms used by the Shura Council for appointing editors-in-chief are very insulting and make the new editors-in-chief secretaries to the council.
"The Islamists are dominating everything and following the same tactics, just like the NDP used to, and maybe even worse. It's like they want to take revenge on national newspapers for attacking them in the past," Abdel Khaleq said.
In a report released last month, the Shura Council set its criteria for selecting the new appointees, and said that deteriorated financial and administrative conditions in state-owned press organisationsare the result of the interference by those in power in the management ofthose organisations.
The report also stated that the Shura Council, "the real owner of those institutions," gave up on its role, ultimately allowing individuals to be promoted according to the whims of power, which led to deficiencies in organisational structure and internal dictatorships.
The report alsoannounced seven measures and three conditions for hiring new chief editors including implementing an age limit and a minimum requirement of 15 years experience. Also thatno chief editor will be appointed if he was proven to be involved in a corruption case.
Tweet
Pope Shenouda Article