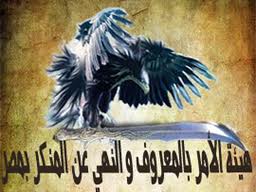 Commission for the Promotion of Virtue and Prevention of Vice (CPVPV) has carried out its first assassination in Suez by killing a young man who was walking with his fiancé.

CPVPV has written on its official page on Facebook: “The praise to Allah... We have carried out our first operation during the era of Mr President Mohammed Mursy... in the great city of Suez... as we have assassinated a rogue man who was accompanied by a foreign woman... O God, help us establish your country”
The commission has affirmed that this young man has been practicing misconduct. Thus, they had to kill him.
It's worth mentioning that the young man was killed in Suez while he was walking with his fiancé, and his father said that 3 members of an Islamic group had stabbed him to death in his body and especially his genitals.
Tweet
Author