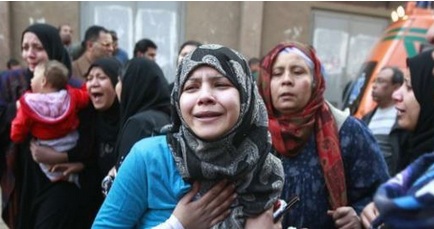 Relatives of Ahly Club supporters who were killed in the Port Said football stadium last February blocked the road outside the Police Academy in Cairo on Wednesday. They were protesting the Port Said Criminal Court’s decision that they cannot attend the trial of the 75 defendants in the case.

The court said it took the measures to avoid fights between the victims' families and defendants during the trial.
On 1 February 2012, a premier league match between Port Said’s football team Masry and guest team Ahly in Port Said Stadium ended when Masry fans swarmed the pitch and attacked Ahly supporters. The rampage led to 74 deaths.
During Wednesday’s session, the court heard the testimonies of defense witnesses and the defendants, who denied all charges.
Islam Ezz Eddin, 23, a photojournalist who administers the Masry fans’ website, said he had attended a meeting by the club’s supporters one day before the match. He said attendees at the meeting had agreed to welcome Ahly fans. He blamed the fatal clashes that occurred on 1 February on an insulting banner displayed by supporters of the rival team.
Eddin also said he had told Port Said’s security chief, Essam Samak, that a plot was being prepared days before the game. Samak denies that this conversation took place. Eddin also blamed the stadium’s lighting engineer for the light outage that occurred when the violence broke out.
Tweet
Pope Shenouda Article