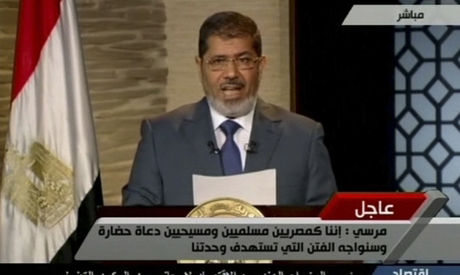 Egypt's Islamist President-elect Mohammed Mursi said in an interview with Iran's Fars news agency published on Monday that he wanted to expand ties with Tehran to create a strategic "balance" in the region.

Diplomatic relations between the two countries have been severed for more than 30 years, but both sides have signalled a shift in policy since former president Hosni Mubarak was overthrown last year in a popular uprising.
Fars quoted Mursi as saying better relations with Tehran "will create a balance of pressure in the region, and this is part of my program".
Mursi's comments may unsettle Western powers as they seek to isolate Iran over its disputed nuclear program, which they suspect Tehran is using to build atomic bombs. They cautiously welcomed the democratic process that led to Mursi's election, but made clear Egypt's stability was their main priority.
Fars said he was speaking a few hours before the result of the Egyptian election was announced on Sunday, and that a full version of the interview would be published later.
Asked to comment on reports that, if elected, his first state visit would be to Iran's regional arch-rival Saudi Arabia, Mursi said: "I didn't say such a thing and until now my first international visits following my victory in the elections have not been determined".
Mursi's victory over former general Ahmed Shafik in Egypt's first free presidential election was subsequently hailed by Iran as a "splendid vision of democracy" that marked the final phase of an "Islamic Awakening".
Mainly Sunni Muslim Egypt and predominantly Shi'ite Iran are among the biggest and most influential countries in the Middle East, but they have had no formal ties since 1980, following Iran's Islamic Revolution and Egypt's recognition of Israel.
Egypt's foreign minister said last year that Cairo was ready to re-establish diplomatic relations with Iran, which has championed most Arab Spring uprisings as anti-Western rebellions inspired by its own Islamic Revolution in 1979.
But it has steadfastly supported Syrian President Bashar al-Assad, Tehran's closest Arab ally, who is grappling with a revolt against his rule, and at home it has continued to nullify demands for reform, which spilled into the street following the disputed re-election of President Mahmoud Ahmadinejad in 2009.
Tweet
Pope Shenouda Article