Hamzawy to MB: Be humble and waive for Sabahi 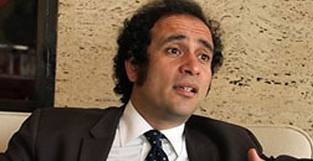 MP Dr. Amr Hamzawy said in on Twitter: He who ask Mursi to pull out of the elections doesn’t support Shafik to win, but rather aims at uniting the nation to prevent recreating the previous regime or the dominance of one faction over politics.

He added that many jurists say that the withdrawal of Mursi will give Sabahi the chance to win the presidential elections.
Tweet
Pope Shenouda Article