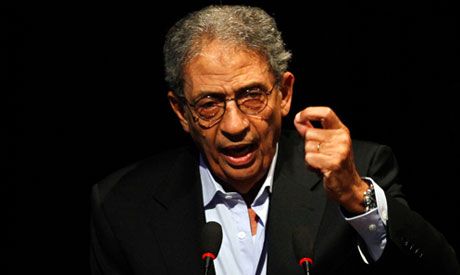 Egyptian presidential hopeful Amr Moussa began a tour of Upper Egyptian cities on Sunday with the aim of promoting his electoral campaign.

On Sunday afternoon, Moussa visited the Church of Mar Girgis in the Upper Egyptian city of Sohag, where he told church officials that he was an "independent candidate – not the candidate of any religious, government or military entity."
After arriving at Luxor Airport one day earlier, Moussa held a campaign rally at the village of Al-Qarna, where he told attendees about his development plans for Upper Egypt, a main component of which is the achievement of agricultural self-sufficiency.
Following the Luxor rally, Moussa stopped in the city of Qena on Saturday evening where he visited the Malak Monastery and held two campaign rallies in the nearby village of Al-Mahroosa and the district of Nagaa Hamadi.
Moussa has faced mounting criticism recently over his close association with ousted president Hosni Mubarak, under whom he served as foreign minister from 1991 to 2001.
Moussa's detractors demand he be subject to Egypt's recently-enacted disenfranchisement law, ratified by Parliament and approved by Egypt's ruling military council earlier this month. The new legislation bans former Mubarak-regime officials from participating in Egyptian political life for a ten-year period.
Moussa's current trip to Upper Egypt is the third of its kind since he first announced his intention to contest the presidency only days after Mubarak's ouster early last year.
Moussa was the first presidential candidate to complete the candidacy-application process after collecting over 30,000 citizens' signatures in support of his bid as has been mandated by Egypt's Supreme Presidential Electoral Commission.
Egypt's first post-Mubarak presidential polls are slated for 23 and 24 May, with a runoff vote on 16 and 17 June, if necessary. The new president will be named on 21 June.
Tweet
Pope Shenouda Article