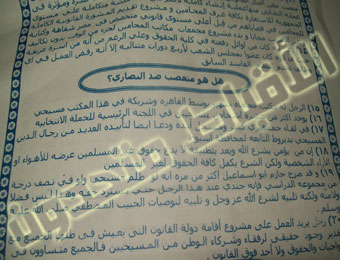 A number of supporters of Hazem Abu Ismail, a likely candidate for presidency distributed leaflets in Beni Suef in which they demanded Christians to elect him, denying he is against Christians. It said that Abu Ismail’s partner in the law firm is a Christian lawyer in addition to 10 Christians in the main committee to support Abu Ismail’s campaign.

It added that he who believes in and support the law of Allah should protect Christians and care for them as partners of the homeland!
The leaflet added that Abu Ismail is after a state of law where everyone enjoys equal rights, and where no one is above the law.
Tweet
Pope Shenouda Article