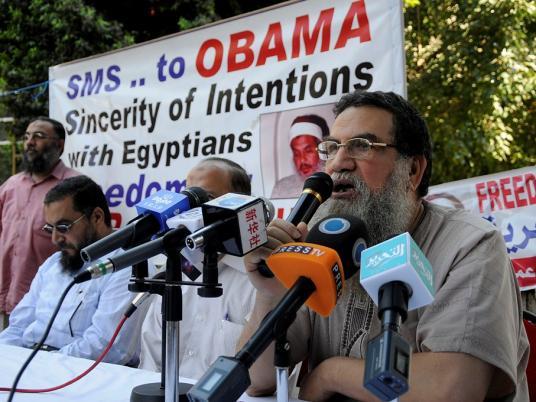 Aboud al-Zomor, member of the Jama’a al-Islamiya Shura Council, has said the Muslim Brotherhood has the right to go back on its decision not to field candidates in the presidential election if circumstances change.

“Shater is a patriotic capitalist,” he said at a rally organized by the group’s Building and Development Party in Fayoum on Thursday, which was attended by members of the Salafi Nour Party and the Freedom and Justice Party.
The Brotherhood and the FJP had earlier this week nominated former Deputy Supreme Guide Khairat al-Shater for the elections that are scheduled for May, a marked shift from the group’s previous position.
The move caused a stir in political circles, especially among liberal parties, which accused the group of attempting to dominate the political scene, as well as other Islamist parties, which said the move would split the vote for Islamist candidates.
Zomor attacked the media, which he said was the machine that helped the previous regime, and accused it of fomenting sedition. “We shall never have another dictatorship,” he said.
“We will end the marriage between politics and money,” he added. “The politicians of the former regime sold the public sector and stole the money,” he said.
Tweet
Pope Shenouda Article