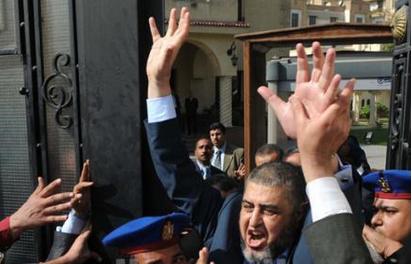 The Muslim Brotherhood and the Freedom and Justice Party's presidential hopeful Khairat al-Shater submitted the papers required for his candidacy to the Presidential Elections Commission in Heliopolis on Thursday. Shater headed to the commission headquarters with thousands of supporters from across Egypt.

Thousands of young Brothers who gathered outside the commission's headquarters chanted "The people want Shater as president," "Oh Egypt, Shater has come to rescue you from risks," and "Oh time look at us, we are the young Brothers."
A number of Brotherhood volunteers in green attire regulated traffic after the crowd caused severe traffic congestion on the surrounding streets.
Saeed al-Gazzar, one of the rally organizers said: "The gathering of the young Brothers is just a small celebration." He added that a march in Arish has been staged to express support for Shater so as not to cause a severe traffic congestion.
Shater reached the commission's headquarters Thursday at noon accompanied by a number of Brotherhood leaders. He remained inside the headquarters for two and a half hours, during which his supporters continued to cheer for him.
Tweet
Pope Shenouda Article