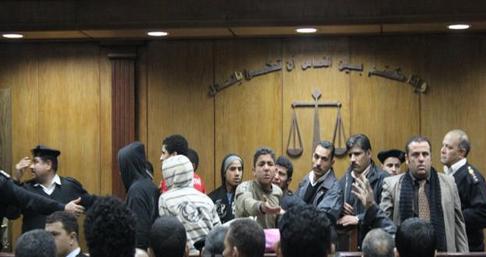 An Egyptian court on Wednesday sentenced a 17-year-old Christian boy to three years in jail for publishing cartoons on his Facebook page that mocked Islam and the Prophet Mohamed, actions that sparked sectarian violence.

Gamal Abdu Massoud was also accused of distributing some of his cartoons to his school friends in a village in the southern city of Assiut, home to a large Christian population and the hometown of the late Coptic Orthodox Pope Shenouda.
"Assiut child's court ordered the jailing of Gamal Abdu Massoud ... for three years after he insulted Islam and published and distributed pictures that insulted Islam and its Prophet," the court said in a statement seen by Reuters.
The cartoons, published by Massoud in December, prompted some Muslims to attack Christians. Several Christian houses were burned and several Christians were injured in the violence.
Human rights lawyer Negad al-Borai said the jail sentence was the maximum penalty under Egyptian law for such a crime.
Christians, who make up about 10 percent of the country's 80 million population, have long had a difficult relationship with Egypt's overwhelmingly Muslim majority.
Tension between Muslims and Christians has simmered for years but has got worse since the revolt that toppled Hosni Mubarak. Christians have become increasingly worried by a surge in attacks on churches, which they blame on hardline Islamists, though experts say local disputes are often also to blame.
Tweet
Pope Shenouda Article