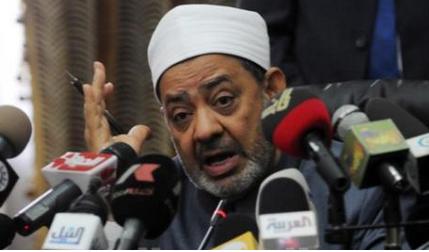 Both religious institutions had agreed to withdraw from the assembly on the grounds that they are not properly represented in it, and that it is dominated by the Muslim Brotherhood.
They would also discuss the role of the religious establishment in Egypt to achieve national consensus and societal stability.
Tayyeb’s advisor Mahmoud Azab said the assembly would deviate from its goal if it prepares an unbalanced constitution that does not represent the whole of the Egyptian people and express their ambitions and aspirations for a modern Egypt that is not dominated by a particular faction.
On Monday, Freedom and Justice Party head Mohamed Morsy and secretary general Mohamed al-Beltagy visited Tayyeb and requested that Al-Azhar return its representative to the assembly.
Members of the Islamic Research Academy, Al-Azhar’s body in charge of handing down fatwas, said during a meeting Tuesday it would not return to the constituent assembly until it is given appropriate representation.
Tweet
Pope Shenouda Article