FJP: We nominated al-Shater to save the revolution 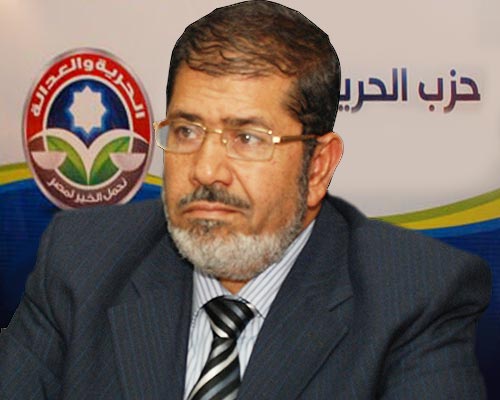 Dr. Mohammed Mursi, head of Freedom and Justice Party (FJP) said the reason that made Muslim Brotherhood (MB) to nominate al-Shater for the presidency is the need for such decision in the current stage, and this is not to cancel the other one. He added: “Shoura Council of MB has decided to nominate al-Shater to save the revolution”!

MB can make its own decisions as long as it doesn’t affect the freedom of the others. Egypt needs somebody from MB to lead it, and MB has to do this for the Egyptian people, he added.
At the beginning of his speech, Mursi stressed on the free elections which leaded the MB to the Parliament. However, he said there are many reasons behind the MB’s decision to nominate al-Shater for presidency; however he never mentioned any of those reasons.
About the crisis of the committee to draft the new constitution, Mursi said that MB was cautious to have a variety in the committee that it contains all spectrum of the community. He said that MB has already convinced al-Azhar and the church to return to the committee.
Mursi denied that Egypt would be a religious state, but a parliamentary state where non-Muslims will abide by their own religion.
At last, he said in his interview in “90 Minutes” talk show which is hosted by Amr al-Laithy, and aired on al-Mehwar satellite channel, that the committee of the new constitution will keep working and at last the decision is for the Egyptians by the referendum on it. He added that al-Shater being the Egyptian president will belong to Egypt rather than the General Guide of MB.
Tweet
Author