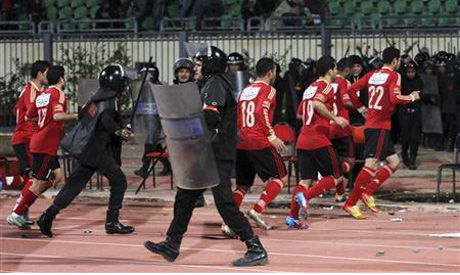 The Port Said disaster is included in the agenda of FIFA’s executive committee meeting, scheduled for 29 and 30 March in Zurich, the world governing body said on its official website on Wednesday.

More than 70 supporters were killed and hundreds injured when thousands of Masry’s fans invaded the pitch of Port Said stadium following a 3-1 win over Ahly in an Egyptian Premier League game on the first of February.
Consequently, the Egyptian League was called off and the Egyptian Football Association’s (EFA) board resigned.
Egypt's prosecutor general referred 75 people, including nine security officials, to the criminal court last week to face trial over the riots. The EFA said on Wednesday it will announce sanctions on Masry next week.
Tweet
Pope Shenouda Article