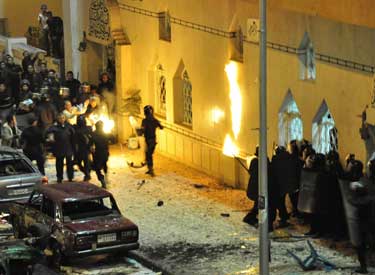 CAIRO: The attorney general of the Higher State Security Prosecution called on Egypt’s foreign ministry to coordinate with its British counterpart to obtain information on the bombing of Al-Qeddesine Church in Alexandria.

A memo was sent at the behest of Prosecutor General Abdel Meguid Mahmoud following his meeting with Coptic lawyer Mamdouh Ramzy, who had filed a complaint accusing former interior minister Habib El-Adly of orchestrating the bombing based on information from the British intelligence revealed by a British diplomat.
“I met with the prosecutor general to inquire about the delay in the investigations into my complaint, which was based on statements by a British diplomat that implicate El-Adly in the church bombings through armed militias comprising police officers and former prisoners,” Ramzy told Daily News Egypt.
A bomb attack on the Church of the Two Saints left 24 dead and tens injured last New Year’s Eve.
“The prosecutor general then ordered the attorney general of the Higher State Security Prosecution to call on the Egyptian foreign ministry to coordinate with its British counterpart,” he said.
A legal source told DNE that foreign ministry officials have already taken steps to coordinate with the British foreign ministry to obtain the details allegedly held by British intelligence.
Next Sunday, the Court for Urgent Cases in Alexandria will look into the Orthodox Church's Holy Synod’s complaint against Prime Minister Essam Sharaf, Minister of Interior Mansour El-Essawy, and Prosecutor General Abdel Meguid Mahmoud, demanding they announce the results of the investigations into the church bombing.
Ramzy had filed a complaint asking for an investigation into alleged information held by British intelligence, implicating El-Adly in the church bombing, through armed militias run by 22 police officers and former prisoners belonging to Al-Gamaa’ Al-Islamiya.
Ramzy’s complaint said that according to the British intelligence, Ahmed Khaled and Mohamed Abdel Hady who were arrested after the church bombing had escaped from state security headquarters in Giza after the Jan. 25 uprising, and sought refuge at the British embassy which transferred them to London where they gave confessions related to the case.
Tweet
Pope Shenouda Article