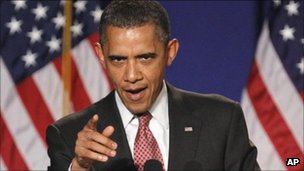 US President Barack Obama is planning a higher minimum tax rate on the richest Americans to ensure they are taxed at the same rate as the less wealthy.

White House officials said Mr Obama would provide details of his proposal on Monday when he reveals his long-term plan to reduce the budget deficit.
Reports say the proposal is to be called the Buffett Rule, after the billionaire investor Warren Buffett.
Mr Buffett says loopholes mean the richest pay relatively less tax.
This is because earnings from investments are taxed at lower rates than wages.
The proposed new tax would affect Americans who earn more than $1m a year.
The proposal is likely to meet a strong challenge in Congress, where Republicans have said they oppose any tax increases.
The US economy has been growing only slowly while the unemployment rate remains stubbornly high, above 9%. Facing an election next year, Mr Obama has had a battle in Congress over how to reduce the ballooning deficit while the economy remains stagnant.
A Congressional "supercommittee" of six Republicans and six Democrats has been charged with finding steep reductions in the deficit by late November, when automatic cuts come into force.
Tweet
Pope Shenouda Article