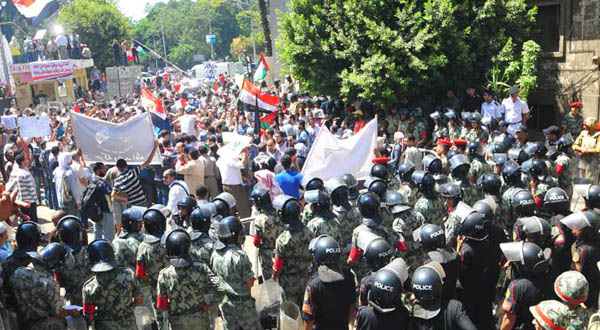 CAIRO: Over a thousand protesters gathered in front of the Israeli embassy following Friday prayers in what was dubbed the “Friday of Expelling the Ambassador”, reiterating their demands to cut diplomatic ties with Israel, after the shooting of five Egyptian soldiers on the borders on Aug. 19.

"We don't want a single Israeli on our land anymore," Sa'deya Mohamed, 70, told Daily News Egypt.
The protesters joined dozens who have been holding an open sit-in in front of the embassy since Aug 19.
They held banners saying "Go to hell Israel," and "We hate Israel," along with posters of late President Gamal Abdel Nasser, symbolizing "patriotism," calling him the "protector of Egyptian dignity."
Gamal Adel Nasser,60, named after the late president, told DNE that, "Nasser always hated the Zionists and America and refused to deal with them."
However, the protesters accused ousted president Hosni Mubarak of being Israel's "loyal follower," stressing that Mubarak's reign of injustice and humiliation has ended.
"Israel should forget the days of Mubarak and all the other Arab leaders who blindly obey it," Mohamed Ewis, 28 said, describing Mubarak as Israel's first man.
"The Egyptian people now recognize the taste of freedom and they will never go back to humiliation of Mubarak's reign again," Ahmed Shehata, 29, said.
Vendors surrounded the embassy, selling Egyptian flags, hats and souvenirs while the protesters chanted to the beat of the tabla echoing in the area. The festive scene was reminiscent of the iconic Tahrir Square on Fridays before Ramadan.
At one point, one protester wrapped himself up in an Israeli flag and posed as the Israeli ambassador with a noose around his neck.
Eyewitnesses told DNE that another protester fired live shots in the air in front of the embassy, and quickly left the scene before the intervention of the armed forces which surrounded the embassy.
The protesters demanded the expulsion of the Israeli ambassador, recalling the Egyptian ambassador from Tel Aviv, halting the export of Egyptian gas to Israel and renegotiating the Camp David peace treaty.
They strongly rejected calls to return the Israeli flag back atop the embassy after Egypt's "flagman” Ahmed El-Shehat pulled it down earlier last week.
"We want to expel the Israeli ambassador completely from our country, and not return his flag," Hossam Mustafa, 27, said.
While protesters chanted that they were willing to go to the frontlines to fight Israel, Mohamed El-Sharqawy, 67, said that as a man who lived through several wars, he didn't want to live through another one.
"All we want is to cut diplomatic relations with them, as they broke the peace treaty by killing our soldiers," he said.
"A lot of countries have severed diplomatic ties with each other and yet they never went to war," he added.
Political powers were absent from the protest, despite calls for a million man march to expel the Israeli ambassador on Friday.
A few movements were however present including the April 6 Youth Movement, which has been part of the open sit-in in front of the embassy since earlier last week, as well as the We are all Egyptians Movement.
Former MP and prominent member of the Muslim brotherhood Mohamed El-Beltagi said the group wasn't against holding mass protests against Israeli violations.
"It just needs to be more organized and unanimous among political powers," he said.
The protesters expected the numbers to soar in the evening, following iftar.
Earlier in the day, over 200 protesters were initially prevented by armed forces from gathering in Tahrir Square, following Friday prayers in Omar Makram mosque. The armed forces eventually allowed the protesters into the square before they decided to head to the Israeli embassy.
Central security and armed forces have been securing Tahrir Square since Aug. 1, after the army violently dispersed a sit-in that had started on July 8.
Tweet
Pope Shenouda Article