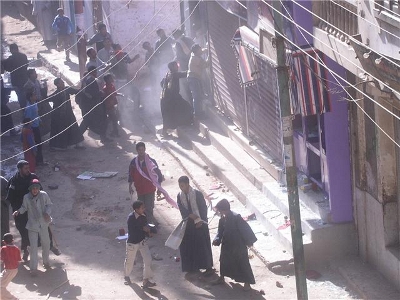 Farshoot, Egypt (AINA) -- Since early morning on Saturday, November 21, the Upper Egyptian town of Farshoot, as well as the neighboring villages of Kom Ahmar, Shakiki and Ezbet Waziri, has been the scene of ongoing Muslim mob violence against Coptic Christian inhabitants. The mob looted, vandalized and burnt Coptic property, while Copts hid indoors fearing to venture out. Reuters Cairo reported that a witness said "chaos is overwhelming (in the city)."

The Violence is still going on. There are reports that seven Coptic women have been abducted.

Witnesses said that nearly 3000 angry Muslims have congregated since the early morning in front of the Police Headquarters in Farshoot, in an effort to kidnap Girgis Baroumi while being transported to court to renew his detainment, in order to kill him. Bishop Kirollos said it was agreed with the family of the Muslim girl Yousra to await the Court decision "but they did not wait for that."

Coptic priest Rev. Benjamin Noshi was driving his car when the mob stopped and assaulted him, fracturing his skull. He is currently in hospital.

By the evening most Coptic businesses were looted and burnt. "They are destroying the Coptic economy in these areas," says Wagih Yacoub of Middle Eadt Christian Association.

A witness said that some Coptic families were thrown out of their homes, which were occupied by Muslims.

Although security forces were deployed, they are not taking any action to stop the violence, they are stationed to protect the Farshoot police headquarters after the angry mob pelted it with stones before going in and attacking the officers. Chief Investigating Officer Essam Hany was injured along with others.

Witnesses said that the Police watched the mob but made no arrests and were just dispersing the mob from one street, only for them to appear in the next.

The violence was prompted by reports of sexual abuse of a girl by 21 year-old Copt Guirgis Baroumi, from Kom Ahmar, on Wednesday November 18, 2009. The 12-year-old Muslim girl has been identified as "Yousra." Girgis is detained by the police pending investigations and awaiting results of forensics. Many Copts believe that the rape incident is by Muslims to use it as a pretext to start violence against them.

In an interview with Free Copts, Bishop Kirollos said that the attacks were definitely preplanned and made use of the students from Al-Azhar Institute in Farshoot. He also pointed out to the failing role of the security forces, which disappeared without giving proper justifications, despite several demands by the church to put an end to these grave violations against Christians and their property.

He also added that even if the story of the indecent assault on the Muslim teenager was true, this was purely an individual incident and does not call for an attack on masses of peaceful Christians, who denounced this individual act which does not comply with Christian teachings. "So why the barbaric attacks by the mobs? and why have the security forces not stopped them?"

Talking to Coptic News Bulletin, the Bishop said that after being informed of the accusations of the rape on Wednesday, he has taken the frightened Copts of the villages of Kom Ahmar and Shedid out of the village to safety. "However, Coptic-owned businesses, pharmacies and cars in Farshoot and Ezbet Waziri are completely destroyed," he said.

Rev. Elisha, Pastor of St. Michaels Church in Farshoot described Saturday's violence as "similar to the Tartar Wars, they burnt down shops, pharmacies, broke down doors of homes and terrorized the inhabitants." Commenting on the alleged rape incident, he said that it is doubtful, besides prosecution did not allow anyone to meet with the accused Copt. "The Farshoot investigating officer told me that the Muslim girl was only sure that her attacker wore a black jacket -- nothing more."

"We have never been so frightened and humiliated as Christians in all our lives. The mob made wooden crosses and burnt them in the street," according to one witness. "Our religion, and our Lord were openly insulted."

As no one is venturing into the streets, none of the Coptic inhabitants contacted were able to confirm if there were any losses in human lives, or the number of injured.

Bishop Kirollos held an urgent meeting with all Coptic priests in the region, in view of the gravity of the situation. He gave instructions that no Sunday church services would be held on 11/22/09 fearing for the safety of the Christian congregations.

"If the International Human Rights Organizations around the world keep quiet about what is happening to the Copts in Egypt, then they are of no use, they just use slogans, nothing more," one witness lamented.